Over the last five or six days, social obligations kept me out of the shop more than I would have liked, but I was able to get a little done. Plus, I was having guests over, so the workshop had to get cleaned too.

The shop had quite a few visitors, Weasel and Craig flew his new airplane up to build some flight time, they were supposed to stay and help sand, but conveniently Craig had to go back to work the next day. But it was great to get their comments and review of the project. Of course weasel had to sit in the beast.

I also had visits from Todd, who is one of the air race volunteers, as well as Greg, a Long Ez builder who has his airplane at the airport a half mile from my house. It was nice to have some socializing and visitors to the shop.

The cowl is continuing to take shape. I did a bit more shaping to clean up a few areas. Then I took a 1 inch hole saw, and by hand cut some holes all the way through the foam. I did this in the places of closest approach for the cowl and the engine. Since I removed the misplaced wood splines from the assembly, I lost reference for engine clearance.

Clearances were checked through these holes, and I am relatively convinced that I have enough clearance. Since I cannot do this over the whole form, I cannot be 100% sure, but I am leaving a bit more room than required to compensate for this.

I also did some work around the dynafocal mount which required a bit of a bump to provide clearance on the mount. Basically I bonded on a piece of different colored foam to the mount to give me a depth gauge. Stop sanding when I get to the green. 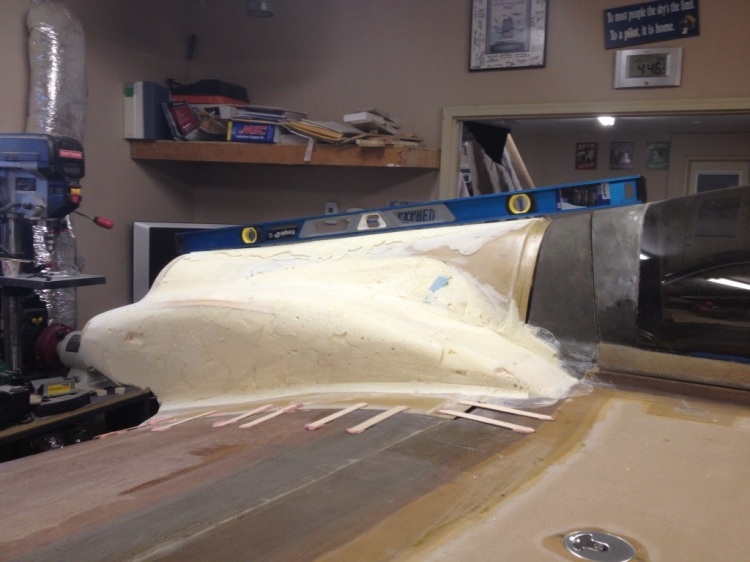 I decided to go ahead and build the cowl, but to raise the cowl top surface up to compensate for this. Basically the top of the cowl will be made so that it is a straight line to the top forward side of the aft canopy frame. Then the turtle deck and the canopy will be reshaped to fit. You can see that in the photos.

Next up will be making templates to ensure that the foam is symmetrical left to right, then putting drywall mud on top of the foam. The foam is not a good enough surface to layup a part, so I have to smooth it more before we can go to part making.

A few more photos of where I am.

One thought on “Top cowl shape is getting there”