Monday Greg came over and I discussed my plans it’s him. My thinking was that it would be nice to get the right wing caught up to the left. Since the left wing at that point was microed and the sanding was pretty ll along, I wanted to get the left wing micro applied. The were a few reasons for this, mostly that it is easier for me to sand by myself than to mix and apply all that micro by myself.

To get the right wing and strake ready for micro, it was the same process as the left wing. Basically it entailed removing the right wing, removing the aileron, prep sanding any areas for bond and truing up the wing/strake intersection for seam treatment. That took all of monday.

Yesterday I had both Jon and Greg here helping work on the long Ez. Jon made me a new sanding spline. I had noticed that my sanding spline was warping, it was about a quarter inch out by tuesday. Can’t contour a flat surface with a bowed spline. Jon told me it was because of the direction I had the grain running. So he made on that was right, and boy is it flat!

Three were ready to start applying micro. This again was the same process as for the other side. But we had a problem. I didn’t realize that I had been using the slow west hardener for the left wing, and when I purchased the new hardener, I got the fast hardener. Add to that a 95 degree day, and we had troubles.

I had two people mixing, and me spreading. The pot life is only about 10 minutes at those temperatures. By the time I was spreading the micro it was already curing enough that I couldn’t get a decent spread of micro. It was tearing all over the place, and if I tried to smooth it, it just got worse. A smart guy would have stopped right away, but I pressed on. I was disappointed with the micro application, and as we were getting to the end of the strike, I started to see some smoke fing from a small pile of micro. It was exotherming. I scraped the smoking pile off, and we quit.

I was pretty disappointed and aggravated at the poor job, that I was considering scraping all the micro off. However we had so much difficulty cleaning the buckets and trowels, that I didn’t think I would be able to. We had to just let it cure and see what we get.

Not wanting to let the day go to waste, and being stubborn, I went and picked up the slow hardener. By the time I was back and ready to micro again, it was late, and I was by myself. Feeling disappointed in the day, I decided I was going to mix and spread myself and get the wing done. Long story short, I won over the day, and the rest of the wing went well. Even though. It took me 3.5 hours to do it myself.

Today Greg was here again, and we got to contour sanding. Not a lot to report on that except r strake wasn’t as bad as I thought. It is actually contouring out quite well. It appears that the ugly surface after spreading was superficial, and I had enough micro on to sand through that, and get to decent micro.

Not many photos, as it was busy, and I didn’t want photographic proof of such poor micro spreading, but he are a few photos from today, after 6 or 7 hours of contour sanding. I am quite pleased at how it is coming along. 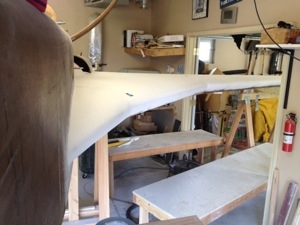