Today the Garaggio had cameos from Craig and Andy. They need to build twin time, so the flew up to help on the Ez. Thanks a ton guys!

Craig gave the contoured surfaces an inspection and was pretty happy with them. He did find a few areas to watch once I get primer on. He thinks I will identify a few areas that are slight high/low spots, but that primer will certainly take care of them. With the exception of the right aileron gap, I think it is time to proclaim them ready for epoxy wipe and primer.

After inspections were out of the way, Craig wet to work sanding on my NACA induction inlet. He made great progress. I have to add a bit of micro in a few small areas, but it is 90% there.

Andy, meanwhile, was working on the bottom of the fuselage starting to prep sand areas for eventual micro finishing. Looks like he knows how to, “ride that horse!” 🙂 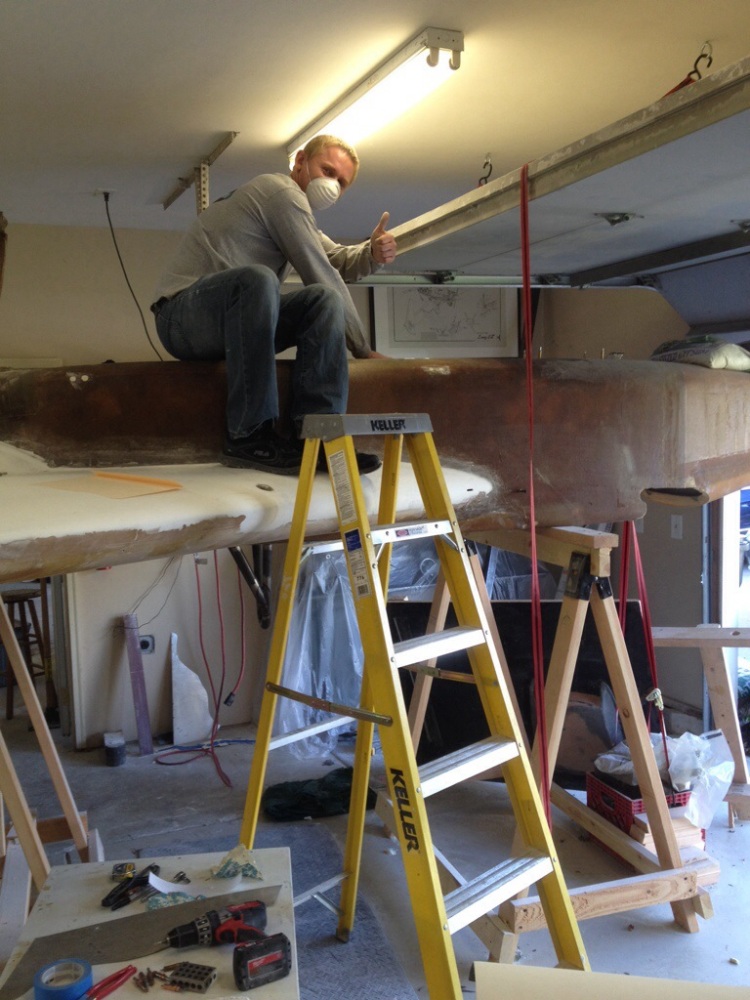 While they were working on that, I was working in rough contouring the bottom cowl. I nocked off most of the lumps and ridges and got a bit of the shape developed.

The cowl contouring still has a ways to go. But as I was discussing areas with Craig, we decided that the best way to final contour would be all at once with the mating fuselage areas as well as with final fasteners in the cowl to make sure that everything is drawn down to final positions.

The clecoes do an ok job locating things, but don’t always pull everything into final position. Screws are stronger in tension, so they will pull everything a little bit further into position and will make a small, but noticeable, difference in fairing everything together.

In such a case, the next things on the agenda will be aileron gaps, getting the wings off to lower the fuselage, getting nut plates on the cowl and induction scoops, finishing gear fairing trailing edges, nose gear doors, and adding the nose bumper. Then the bottom of the fuselage will be ready for micro and we can contour the whole bottom as a unit.

We have our work cut out for us! Off to work tomorrow, back at it Sunday!