Today I trimmed down the saw horses and got the airplane a bit more robustly supported. I was then able to remove the engine hoist and straps. Along with that I trimmed the last layup on the gear intersection fairings and drilled out the cowl mounting holes. It is a good feeling to be working on the airplane at ground level.

This is the monster part. I had previously made a set of nose gear doors, but I always felt they were a kluge job. So, I am choosing to redo them. I just can’t leave things alone that I am not happy with.

In addition I am modifying the nose gear bowl to make it a little wider and get rid of corners that could potentially bind a partially cocked nose wheel. The new shape will have more tolerance for a non centered nose wheel and will also tend to center the nose wheel during retraction if there is slight misalignment.

This job started with grinding out the corners that were in the nose gear bowl and removing the old hinge hard points. I still have a bit of clean up to do, but this is the mess at this point.

Then I started devising a hook shaped hinge that would allow for flush doors and a slight overlap of the doors to seal them. This was a bigger job than I thought. I really have to spend some time reviewing my old geometry texts. It took a couple hours and a few failed attempts to figure out.

The key was realizing that the doors do not need to open 90 degrees, that and a Bonanza parts manual to see how they do it. Another thing that helped in the design phase was to design with the door in the open position and work backwards. Here is my final drawing, of about 5 attempts. A compass is a must for this process.

The drawing is to scale and shows the open, blue, and closed, red, positions for the gear door. You can also see the overlap seal in the closed position and that the gear door is clear of the opening even after only the 80 degrees of travel.

Since I had so many failed attempts I wanted to make a model of the parts to ensure that it was actually going to work. So I cut some hinges out if hard wood and assembled a model.

I am happy to report that the model shows success, and the geometry is correct. I can now forge ahead with fabricating the parts required to make this happen. A successful day! 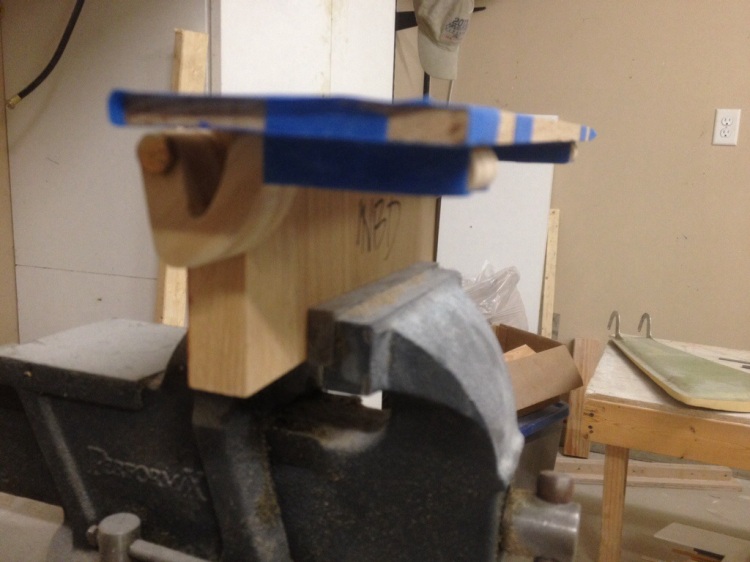 One thought on “I’m a monster!”