Today I had to work, but it was only a day trip so I got some time in the Garaggio. I got some words of advice from Mike and James on the gear doors. I am not going to worry too much if the doors snap open. But I didn’t consider side loads on the gear doors due to a side slip angle. If side load on the doors “break the spring” too easily, the gear doors may close while the gear is down. A subsequent retraction would damage the gear doors and could possibly jam the nose gear. All of which are generally frowned upon.

One way to prevent that from happening would have been to have some ‘draft’ on the gear doors. Basically angle the hinge line on both doors so that the relative wind would force the gear doors open. I didn’t do that, so the next best thing is to ensure that the spring is straight and touching both doors on the interior surface with the doors fully open. That way if there is a side load on the gear doors, they push axially on the spring. It is extremely strong that way, so long as the spring is straight, and the gear doors can’t close. Mock ups of this setup proved encouraging, but inconclusive since the mock up was not rigidly mounted.

The rub with my installation is that the doors only open 85-ish degrees per door due to my hidden hinge arrangement. That means there is no way to get the spring straight with planned installation with the threaded stud passing through the gear door. So what I did was fabricate some phenolic discs that will retain the click bond studs to the inside of the gear doors, allowing me to set them at an angle.

These phenolic discs and click bond studs were then floxed into position with the spring/inserts/click bonds/phenolic assembled, spring straight, and the doors in their full open (85 degree) position. What this  effectively did was create a flox/phenolic tapered shim. This aligned the spring and allow it to be fully straight. I could have done the same thing with just flox, but the phenolic creates a hard point to prevent the click bond stud from tearing out of the gear door.

Tomorrow the first test will be to do a full retraction and extension to verify that those cycles still work properly. Then the next test will be to impose a side load on the gear doors and see if the spring has any tendency to ‘break’ allowing the gear doors to close uncommanded. If that happens, I have another idea how to prevent this under air loads.

I am not terribly concerned about this possibility as of yet. There is a sight window through the gear well to ensure that the gear doors are open before gear retraction. While it is impractical to do this procedure for every gear retraction, it will allow for safe flight testing and allow me to determine if the doors have any tendency to close under side load.

While I was doing some layups, I  added a 2 ply bid layup over the flox holding the hinges on the gear doors. The flox is probably sufficient to hold the hinges in place, but the extra plies of bid regain the rigidity of the gear doors prior to hinge installation. (You can see this in the above photo) Lastly, 2 plies were put over the click bond studs that attach the hinge for the forward gear door. 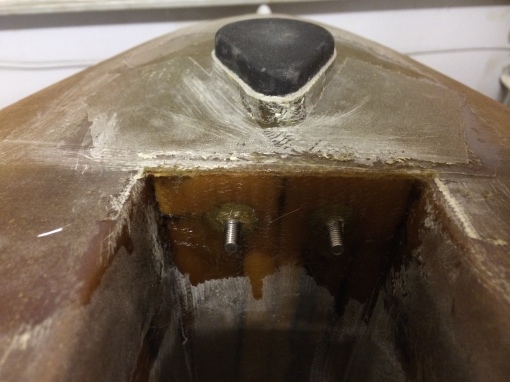 Since I had a bit more time tonight, I continued prepping the firewall side of the cowl attach flanges. There is a 1 ply bid layup that goes here to finish the structural attachment for the cowl flanges. A bit more prep and we will be ready for the layup. 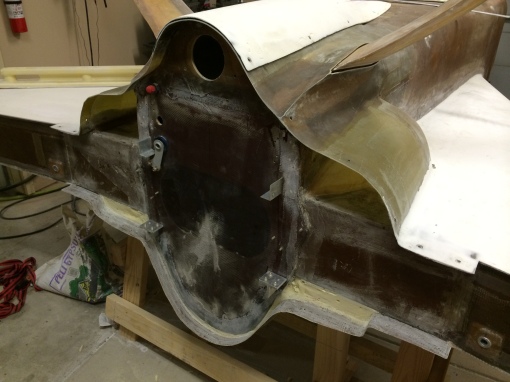