Ever since they shortened the day to 24 hours, I never seem to get as much done as I want to. Or maybe it is just that most tasks in the Garaggio take longer than my optimistic plans. Whatever the reason, I must say that whatever  motivation I was lacking yesterday, was located and put to good use today.

The day started by running over to Greg’s hangar. He is doing the condition inspection on his Long Ez and he wanted another set of eyes on a few things, as well as some help on others. The main task for the day was measuring control surface deflections and comparing them to the specifications in the plans. His controls were slightly out of rig, but nothing that cannot be fixed. We also found a few slightly worn items that need to be watched or replaced.

When I got home I went right to work on the oil check door hinge. Both the hinge and the oil door were sanded in preparation for bonding. Also, In the end of the hinge, I drilled a few holes to form “flox rivets” to enhance the bond of the two pieces.

This basically completed the fabrication of that half of the hinge. The other side of the hinge is two pieces of plywood which serve as the mounting and pivot point for the hinge/door combination. These were cut out of 1/4″ plywood, 1″x1″ and a #12 hole was drilled in the center.

The assembly was then mocked together to test operation. The test validated the pieces, and the mounting points were then bonded to the inside of the cowl using 5-Minute Flox. The 5-Minute Flox holds the plywood in the proper location while allowing it to be disassembled. Two plies of BID fiberglass will be laid up on each side of each mounting point, after everything is fully cured. Of course the squeeze out will need to be removed first. You can also see that the door was bonded to the hinge using West Systems Flox, and two small dabs of 5-Minute Flox, to hold the two parts rigidly in alignment while the West cures.

After about an hour (I used fast West Systems), the flox was at the ‘green’ stage, meaning it was cured enough to be strong, but still chemically active. I then added a ply of carbon BID over the hinge as a final structural attachment. This layup was peel plied for a nice surface finish since we will be sticking our hands into this access door.

I must say that I am very happy with how this has turned out. In the beginning I thought it would be less work than putting a piano hinge on the door. But it turned out it was a bit more work. The benefit is that it does not show at all from the outside when the door is closed. I don’t know if that was enough to justify the effort, but I am proud of it.

Anyways, after the hinge, the focus shifted to making the cowl ready for micro smear. This basically entailed fussing with those pesky aluminum forms that I use to make a straight, parallel seam on the front and sides of the cowl. I probably should have been using sheet wax all along, but chest la vie these seems have to be narrow to match the other seams.  So I fussed with those pieces of aluminum for a few hours. They didn’t end up perfect, but I think they will do the job.

I did, however, use some sheet wax in some locations on the cowl. There was no way on God’s green earth that I was going to be able to make aluminum forms for the seams between the upper and lower cowl around the cooling air exit. Well, no way I would use aluminum and keep my sanity anyhow.  So I cut and placed a little sheet wax.

One thing I learned was that if you use a little bit of aluminum tape to back up the sheet wax, it stays in place much better. The sheet wax has a self stick adhesive on one side, but the adhesive is pretty weak. The aluminum tape adhesive is stronger, and the aluminum has some structural benefit. So combining the two makes all the difference in the world. Just be sure to put the tape on the opposite side from the one you are filling. 🙂

I was about to get to the micro fill when I was given an offer I couldn’t refuse. Jon invited me over to his house to play with his wood lathe and make a pen. I have never used a wood lathe, and I love using my metal lathe, so I just had to give it a shot. So bear with me as I took the Garaggio “on Location.” Jon let me have at it for the most part, but there were some demonstrations he had to make to show me the ropes. 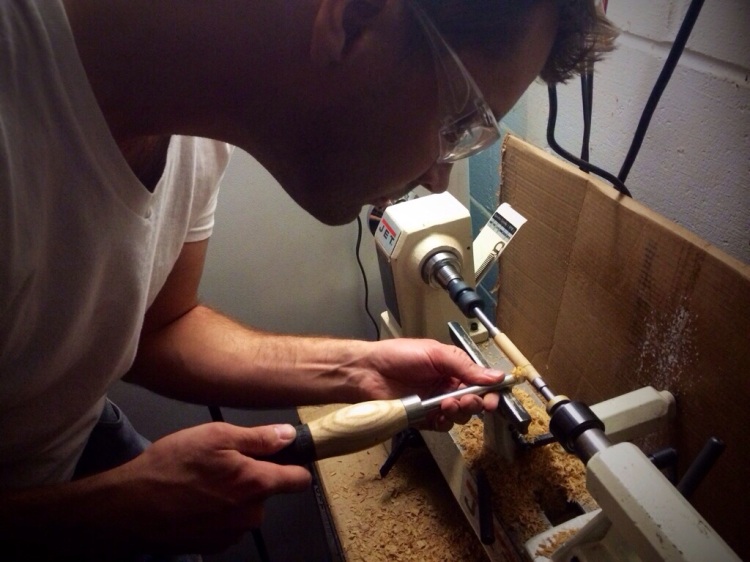 It took me three different tries, meaning I broke or ruined my first two pen attempts. But eventually we got there. One thing that was interesting is you use superglue as a finishing material. It is super durable, clear, and gives a nice shine when buffed to 12,000 grit, or whatever insane sanding pad it was that we used.

It was really nice to be able to do a project that took us about an hour and a half (including driving time to and from). Since the inception of the Garaggio, I am certain that there has been not a single project finished in that amount of time. And the Long Ez has been 6.5+ years in the making, so its quite fun to finish something and put it to use!

Anyways after getting home, it was time to start micro smear. A big thank you to my roommate, Wes, who volunteered to help with the process. We had things going along quite nicely. We mixed up Flocro for seam treatments at the cowl to wing and cowl to turtle deck seams as well as for around the oil check door. Then we started smearing micro on the cowl. That was until we got to this point, and the phone rang. 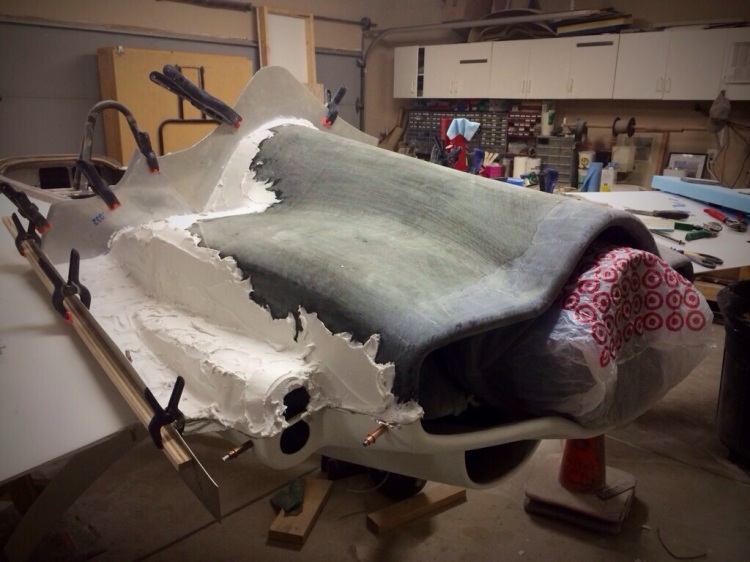 See it is March in Minnesota, and this has been a horrible, no good, very bad winter. We had 44 days in a row of sub zero temperatures, more snow than I can remember, and not a single melt to clean things up. My other roommate decided we were paying too much attention to the airplane, and decided we needed a reason to spend time with him.

So we had to take a quick break and pull his car from the ditch. For the first time in Garaggio history, we get to go “on location” twice in one day!

Anyway, the rest of the night went un-eventfully. Though I lost my helper as he had to go to bed so he could get up for work in the morning. The cowl is now micro smeared and after cure will be ready for contour sanding. I can’t wait to see what it looks like!

As Steve Jobs would say, “And one more thing.”

Today, I finally found an N-Number (Registration number) for the Long Ez that I like. It has significance, is easy to say, and most of all is available in the FAA registry. I am not going to divulge quite yet, I have a plan for that, and I don’t want anyone stealing my number!

Good Night! or should I say Good Morning!