Today’s early morning time in the Garaggio was spent doing some welding with Vic. He brought some keggle (brewing equipment) parts he wanted me to weld, so I obliged and burned some metal. Vic is still working on learning TIG welding so that he can build a brew sculpture. Basically this is a rig to make the beer brewing process more efficient and safe. He has been in the Garaggio in the past to practice TIG welding, and today he seemed quite happy of his progress. He is certainly starting to get the hang of it. I can’t wait for this to take shape, and we will get some pictures and post them here.

I have been spending less time in the workshop the last few days since I am getting closer to having to go to Airbus school this week. As such, I spent some time today studying. When I needed study breaks, I went out to the workshop. It makes for little and slow progress but breaks up the monotony of studying. Sure beats being stuck studying in a hotel somewhere where I can’t take a quick half hour and puts on the project.

Once the hinge fairings were cured and trimmed, my roommate Cory helped me put the canopy on to check fit. We had to do some fine tuning (grinding) on the canopy hinge fairing, but we got everything to fit and operate. I was not quite happy with the alignment of the canopy though. So I did some investigation, which found me caught in the airplane with the canopy latched. 🙂 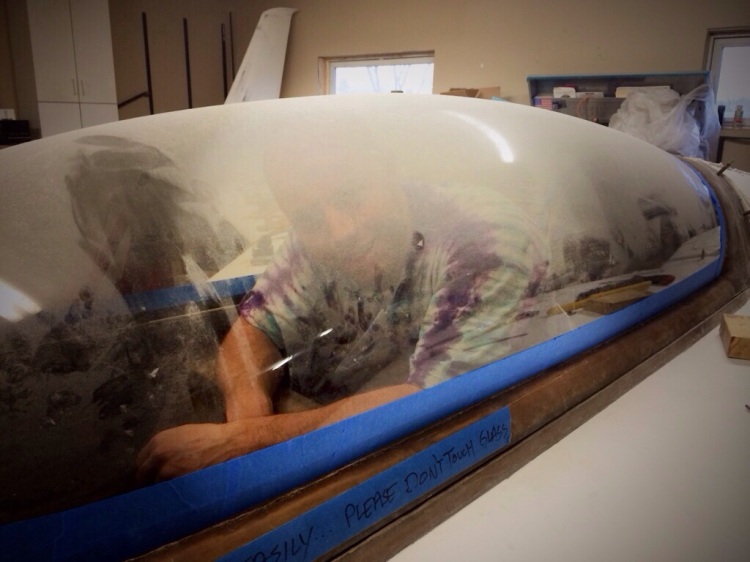 Anyways, long story short, after some investigation, I decided to micro the top of the longerons to make them a true, flat surface. Then I will do the same to the bottom of the canopy rails. This micro fill will allow me to create a constant seam along the length of the canopy/longeron interface, as well as make a micro build up on the canopy rail. I can then carve a groove in the underside of the canopy rail to allow a rubber seal to be recessed into the canopy. Once this is all completed I will either shim the current canopy hinges or modify them to allow it to open and close properly.

It seems like a bit of a setback to make these changes, and I probably will not get micro on the exterior of the airplane this week. However, I think this will make the canopy fit, look, and operate better. It certainly should allow the canopy to seal better which will be important for Minnesota flying, and it will be less drag as well. Time will tell if this is the right course, but now is the time to address it.