If you haven’t already figured it out, I am not a morning person. But I had to be today. Dick needed to head out to make a meeting in Wichita, KS. But with impending awful weather… Low ceilings, gusty winds, and heavy snow… He needed to make it out before the weather got in. So we were up at 5:30 and had him off the ground by 7:10. Good thing we refueled and packed the Bonanza last night!

When I got back from that, a short nap was in order. Being that the work party was down to just myself, I took some time to attend to things I have neglected during the work party days. After lunch, I figured I would take some time to clean up and organize the shop. It has become a disaster, even though Dick spent some time cleaning this week as well. So I started cleaning but was unable to focus on that.

When Weasel and I were planning the work party, we came up with a list of goals. Weasel’s concept was that he wanted to start the “test flying” on the last day of the work party. By test flying he meant things like making a radio transmission, testing the brakes, etc.

As usually happens with these kind of things, even the best laid plans go awry. We didn’t really accomplish any of the test items and didn’t really follow the work plans either. But my lack of being able to focus was one of the test points… Getting to power up the panel from ship power, with the panel mounted in the airplane. So I had to accomplish that test.

In some ways it was a bit of a waste of time. In order to do this test I had to wire up the master solenoid and the avionics master switch. I didn’t take the time to route wires where they should be for this. I just connected point a to point b. So that will have to come out, and be re done.

But, the visual motivation and pumping up the tires by being able to push buttons was huge. For so long the airplane has been a piece of structure without any systems. Today we had two firsts, turning the master on to power the VPX (main bus), and powering on the avionics in the airplane. Talk about a boost. Even just the ‘click’ of the master solenoid was exciting and motivating.. So you can imagine what it felt like to see the screens boot up. 🙂 Without further ado…

It even had a GPS signal inside the Garaggio and knew where we were. 🙂

Oh, I had to mount he GEA25 on the part we made and bonded in yesterday. Here you can see it installed in the hell hole. 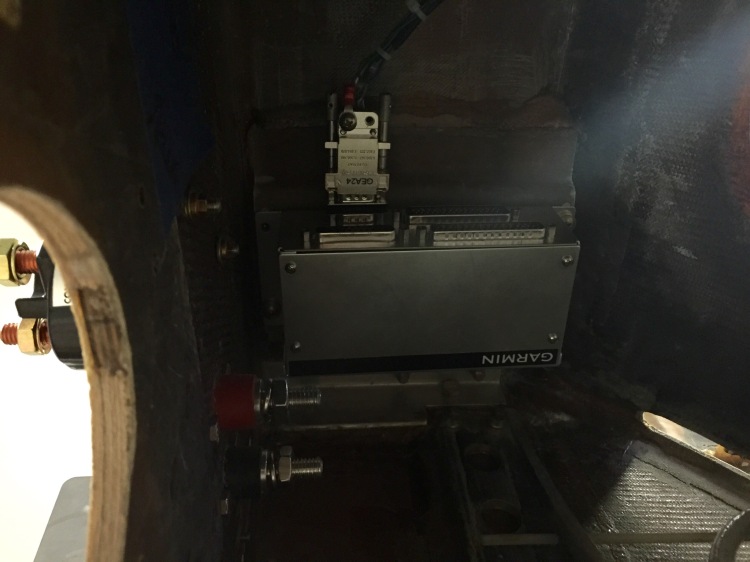 Tomorrow is the last day of the work party. I’m not ready to stop and go back to work.