One of the cool things about blogging about this project is that I have quite a few builders following. Builders who are still building, and builders who are flying. It is always nice to have those people watching over what you are doing and giving you tips, suggestions, and keeping you motivated. One of those people, James Redmon, who has built an award winning Berkut (and also finished a second one, and is working on a third one), sent me a note suggesting a few things I should do in response to yesterday’s post. One thing was add strain relief on the oil temperature probe by adding a dab of shoe goo to the end of it as they are known to break wires easily. The second is to use a more modern hose for the oil cooler installation. Both of which will be done, and you will see them as they get done. Thanks a ton James!

Alright, on to today. This morning I started by adding aluminum grommets to the wire pass throughs in the firewall. To do this you use versatube, which is dead soft aluminum tubing. It is actually a simple process, but required making a few ‘extra’ parts to get it right. You start by cutting a oversized length of aluminum tube to work with. I made a tubing clamp for the vice by drilling a 5/8″ hole in a block of 2×4, then cut it across the center of the hole. This allows you to rigidly hold the tube to form a flange on one end.

Then you start to make the flange. I started by putting a bullet shape on a piece of aluminum rod and using that as a lever to start to flare out the tube. I noticed that this was deforming the interior of the tube, putting dimples in it. That wouldn’t do, so I started again. This time I used a piece of wooden dowel with the same bullet shape to start the flare. This worked well and didn’t dimple the inside. I was only able to get about the first 25-30 degrees of the flange done this way. Then I switched to using a hammer with the dowel to get the flange to bend further. As I was getting closer to having the flange, I used a plastic ended mallet and finished the flange. Once there is a flange, I took it over to the bench grinder and polished the flange.

Then you insert the tube into the hole in the firewall and mark the thickness of the straight section for the grommet. Then I added 1/4 inch to the length and cut it off. Then for the fun part. You put it in the firewall and hold a bucking bar against the flange. This requires two people, or someone much stronger than me. Luckily for me, Greg was here all day. With the bucking bar holding the flange flush against the forward side of the firewall, we started with the dowel to start a flange. It is hard to use the dowel with a short grommet like this. But we got a start. Then we took the rounded side of my ball-peen hammer (which happened to be the perfect diameter) and held that against started flange centered on the tube. We used a second hammer to strike the ball-peen all while holding the bucking bar firm against the forward flange. This produced great results. We stopped using the ball-peen when we were 80 percent of the way done.

Then we switched to a sledge hammer. I know what your thinking. But we held that in place of the ball-peen and struck that with another hammer. The advantage to doing this was we had a flat surface on both side of the sledge and we weren’t risking putting a dent in the stainless steel firewall. This got the grommet 99% of the way there. A few taps with a rubber mallet and the edges sat down beautifully. It was fun to see it work so well. I am happy with the result. Here is the first one, on the right side of the firewall.

And the one on the left side.

I have to admit, I cannot take credit for this idea. It was stolen from James Redmon’s Berkut 13 site. I highly recommend it. It works well and makes a very professional looking grommet. The edges are very smooth and there will not be any wire chafing. Once all the wires are run, the hole will be sealed with RTV.

After this was all done, I spent some time in the hell hole. It is not fun working in there, over your head, in a confined space. Who in the heck decided to mount so much crap in there? I guess I have to blame the builder…. Anyways. I started by putting final hardware on the autopilot roll servo mount and linkages to the roll torque tube. It was a tedious task. As I said, there isn’t much room in there, and the throw you can get with a ratchet is pitiful.But the servo is rigidly mounted, and all the final hardware for the aileron torque tube is in place, and torqued down.

The most difficult part of the operation was installing the the roll servo bell crank stop bracket. This bracket is important in that it prevents the push tube for the autopilot servo from going over center. If it was ever to go over center, it would lock the ailerons, which is more excitement than I care to have in an airplane. The problem is this bracket is held in place with 4 tiny screws, they are somewhere in the neighborhood of 3/32″ diameter screws, 1/8″ long with Locktite and a lock washer on them. I failed to plan ahead for this when mounting the servo to the bottom of the spar. I didn’t leave near enough room or access to get a screwdriver in there, even my right angle screw driver. I had to improvise, I needed a short reach right angle screw driver.

So i took a ratcheting screw driver insert and ground it shorter. Then I used a hemostat as my handle. I used the grease trick to hold the screw onto the screw driver tip. If you are not familiar with that, you put a dab of grease on the tip of the screw driver and it holds the screw to the driver tip. Then I carefully got the screw started. I was unable to get it to turn more than about 1/8 of a turn with each swing of the hemostat. So after each swing, I had to rotate the screw driver tip in the hemostat and go back for another 1/8 turn. Needless to say, this process took a very, very long time… and there were 4 screws. Did I say I was working overhead, sitting on the floor, in the hell hole… it took a very, very long time. But I was successful. The servo bell crank is certainly not able to go over center now. Sheesh.

Here you can see the full setup with the push pull tube installed, and everything in a flight worthy condition. While I was up there, I cleaned up the wire routing a bit as well. It has a bit to go, but at least we can tell what everything is. 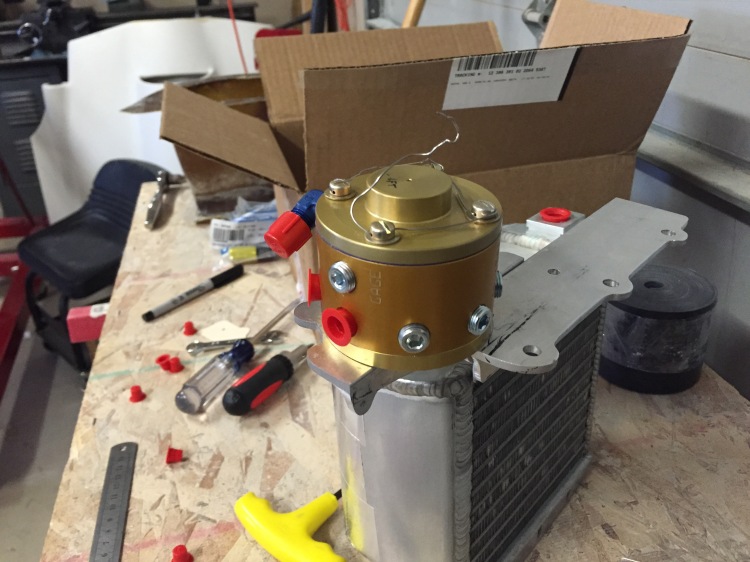 The good news is, the new one works. Before final mounting, I had to safety wire the top of the fuel distribution block. We had removed the safety wire to explore mounting options. I had to do it twice, but finally got it right. Here you can see the oil cooler mounted, the fuel distribution block mounted to the oil cooler mount, and the oil pan bolts re-torqued to the specified values.

About this time, Greg had to go, and Eric came over. Eric got to work on wiring. He started by putting the connector on the aileron trim motor and the mating wires that go to the trim switch and the Garmin G3X aileron trim position sensor inputs. We are using PCI-e type connectors that are rated for high temperature.

Then he put connectors on the pressure sensors that are mounted on the sensor manifold block on the upper firewall. These are oil pressure, manifold pressure, and fuel pressure. In the following photo you can see the pressure sensor wiring and the aileron trim wiring on the right spar. The remaining wires that are coiled up are the remainder of the engine sensors and will be wired once the engine is hung. They are things like CHT, EGT, tach, etc. There are only 13 more engine sensors/indicators to wire. Note that another suggestion from James, is to move the wires to the bottom/inboard side of the pressure sensor manifold. This is to prevent snagging the wires when installing the cowl. 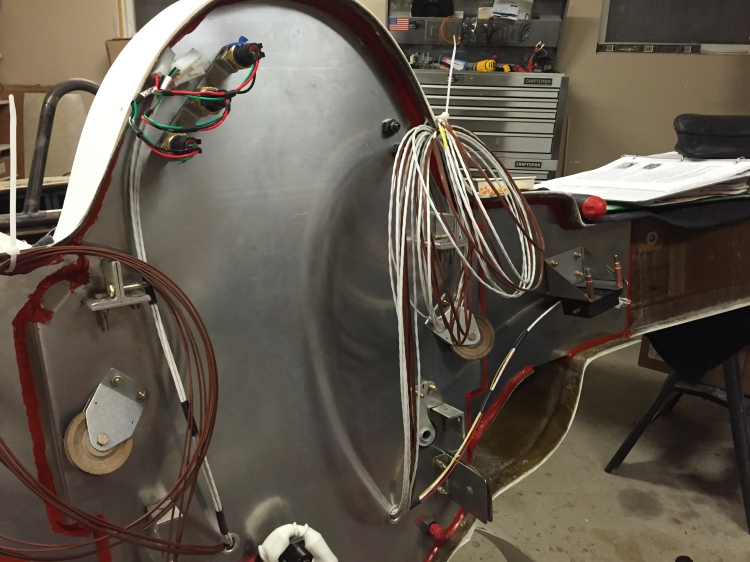 Of course, since we had more things wired, we had to test them. So we played with the aileron trim and watched the actuator move. Then we looked at the EFIS and saw that we were indicating manifold pressure (atmospheric pressure), oil pressure (zero), and fuel pressure (zero). In addition, we temporarily calibrated the aileron trim, and were able to see trim position on the PFD. That was very satisfying for both of us. Little victories, many little victories! 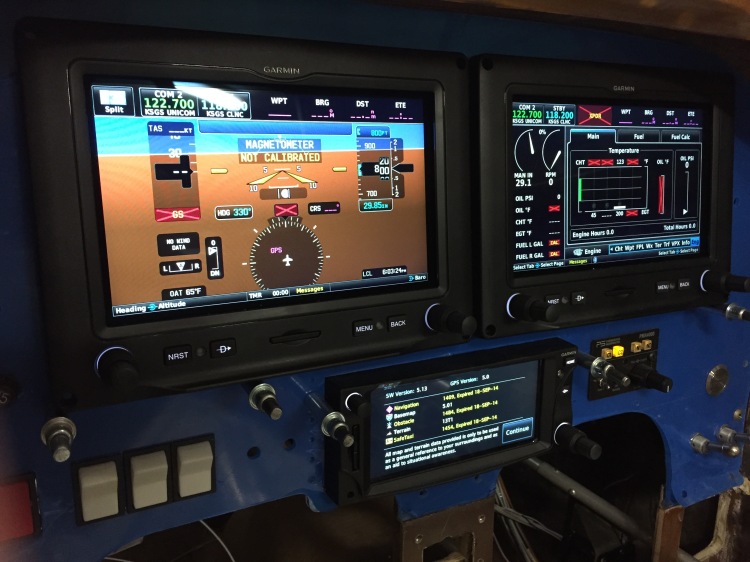 In-between helping Eric, I was working on the oil cooler exit duct. I needed to drill out the holes to the final size for mounting. Then I added nut plates around the perimeter of the aft flange. Here you can see the oil cooler exit duct mounted in place with final hardware. I think I went a little overboard on the mounting hardware, but it is rigid and adds rigidity to the baffles. 🙂 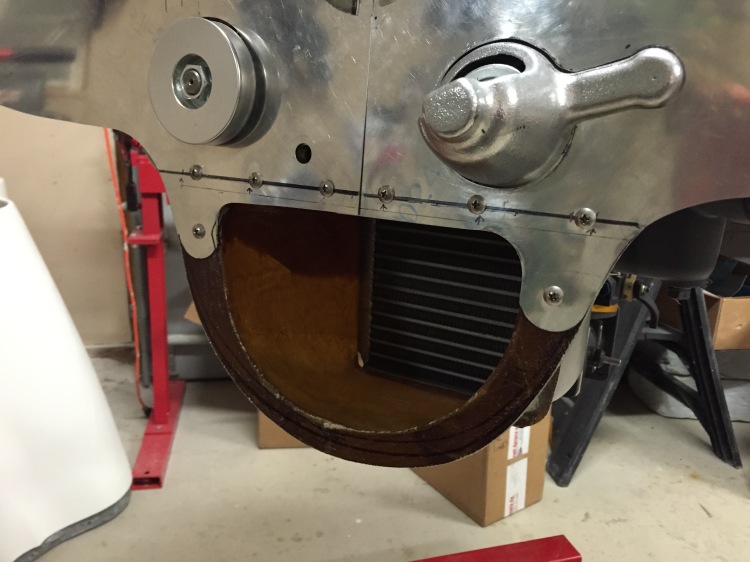 Today was a great day in the Garaggio. Lots of little things done! Can I say that I do not miss the sanding and dust, this type of work is a lot more fun.

2 thoughts on “Thanks to followers, we get a better product”