Every time that Eric and I are in the workshop wiring things, Kevin comes in and asks things like “when are the christmas tree lights going to be on?” Etc. Well, that happened today. The end result was the Nav, Strobe, and landing lights were wired. Ok, so they were temporarily wired, but still totally worth it to see this.

The reason they are only temporarily wired is because the wings aren’t on. But the wiring to the strake ends is permanent and in place. We just need to wire from the wing root to the light locations and we will have the exterior lighting done. Of course, I haven’t actually mounted the landing lights yet. These will be mounted well after first flight as I cannot fly at night during flight test anyway. Plus, I am not going to complete any of the optional tasks before first flight. It is time to get the bird flying. Small mods like adding the landing lights can be done during bad weather weeks once it is flying.

To run these wires for exterior lighting, we had to first drill a hole in the spar bulkhead so the wires could pass though. Luckily, Eric had 8′ long drill bits, and they work nicely. 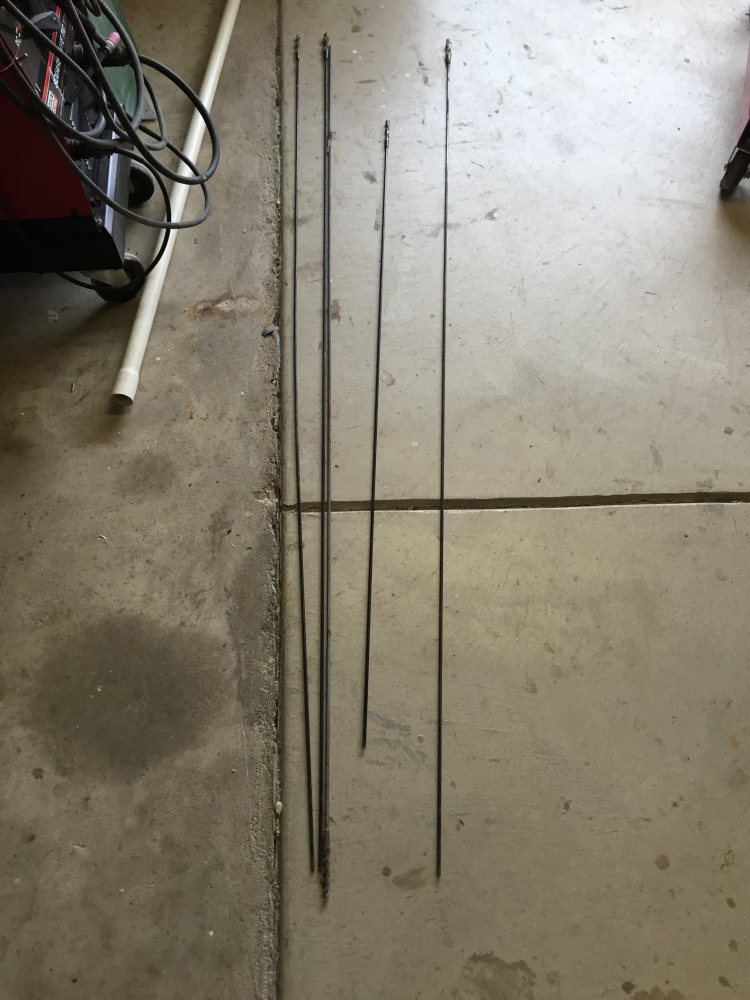 Then it was a matter of routing wires, being sure to nicely add them to our combed wire bundles. There were 6 wires to each strake end. One of them goes between the two sides to synchronize the strobe flashes.While we were at it, we also added some RG400 to each strake tip for the communications antennas that are in each winglet. These will be terminated later, but they are in place and follow the same routing. Incidentally, while we had the RG400 out we routed a wire for the ADSB receiver antenna. I guessed really well when buying the RG400 as we didn’t even have an inch to spare. 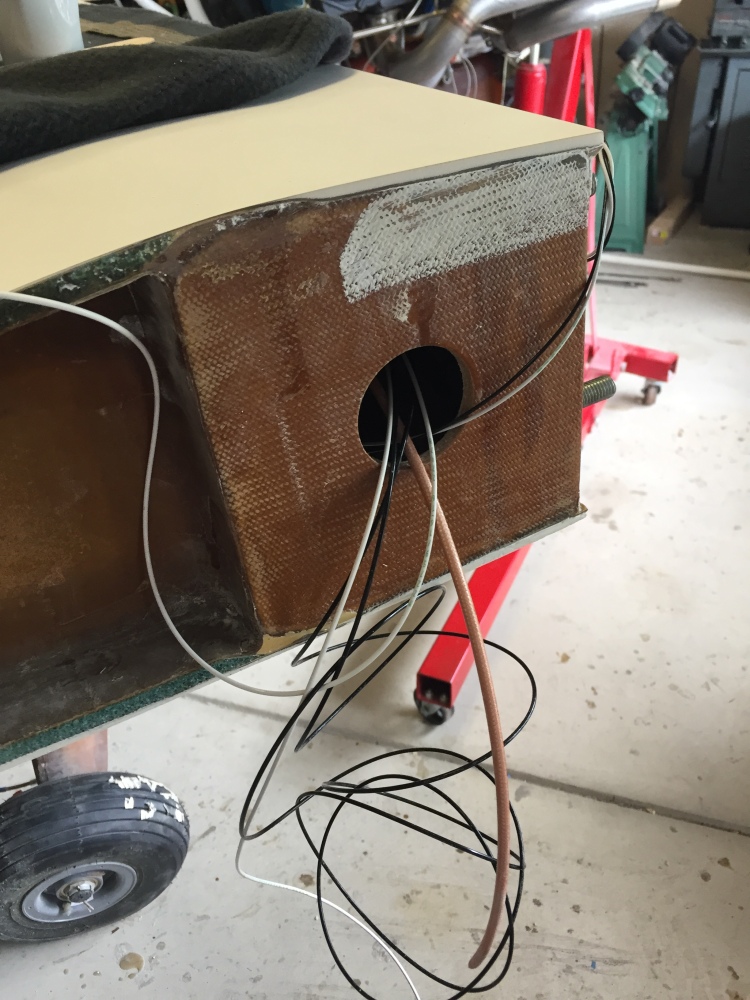 When the external lighting wires are terminated, they look like this. Nice and labeled. Eric does nice work!

In between helping Eric with these tasks, I worked on some of the fat wires. I was able to route, cut to length, and terminate the wire from the alternator to the current limiter and from the current limiter to the positive stud in the firewall. The positive stud runs current from the alternator all the way up to the nose to recharge the battery and also to supply the VPX (main bus) during normal operations. 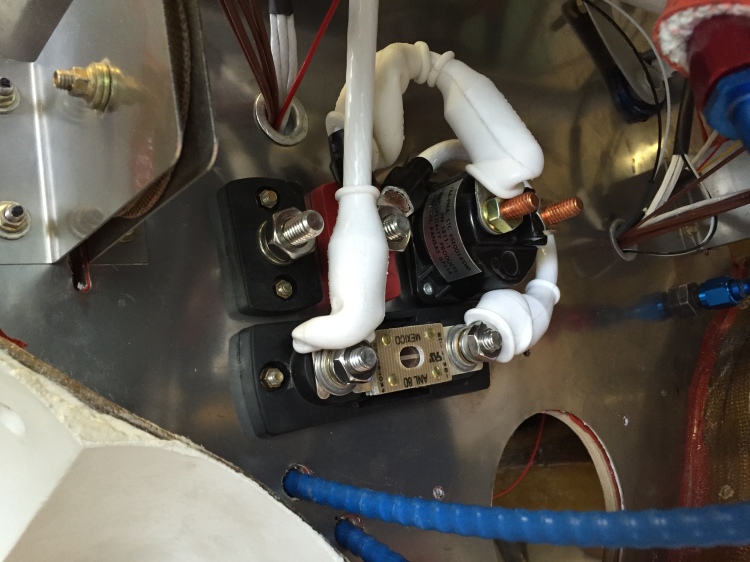 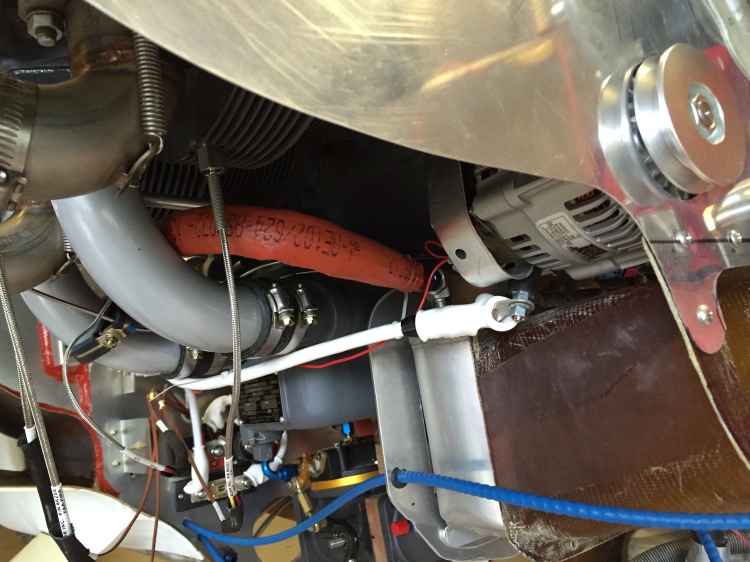 By the time we got all of that done Eric had to leave, but not before we got to test out our external lights. It was satisfying, as you can see by the video. It is always nice to see more and more things working. As far as wiring goes, the list keeps getting smaller.

I didn’t have the motivation to get to work on the baffles after all of this light excitement, but I did spend some time cleaning the shop. That is an endless task as well, but needs to be done. I ended up reorganizing things, and have a little ways to go yet. I didn’t like having a bunch of things in front of the overhead door. (Though that has benefitted me more than once by creating a barrier to unwanted visitors, It is nice to be able to walk outside.) By putting some things away (finally), and organizing parts I was able to get rid of one of my extra tables that was in front of the door.

You probably also noticed I rotated the airplane around to be facing outward. Really that was just an excuse to take the airplane for a walk. Its an airplane after all, its not supposed to be in one place for so long.