Greg and I are continuing working on engine stuff. There is a relatively long task list. But we actually checked quite a few things off today.

Greg spent a lot of time working on the air induction system. He got the alternate air door/filter mount fit to the firewall and drilled to match the mounting. That was no small job actually. There is still one more thing needs to happen to the alternate air doors. That is to install magnets to keep the doors closed in normal operation. It’s just a simple Flox job to add those. And I need to find the right magnets… Strong enough to hold the doors closed in normal operation, but weak enough to allow the engine to suck them open if the air filter gets clogged.

In addition to getting the alternate air/filter mount installed, Greg got the flange mounted to the fuel injection servo and bridged the gap with a piece of scat tube.

We still need to safety wire the duct flange on the fuel injection servo, but we will get that tomorrow.

While he was working on that, I had to go back and change the gaskets on the ignitions. Long story, but I got them installed and the ignitions torqued down to the proper specs.

Then I switched gears to do a bit of wiring. We are working towards a first engine start, and in order to do that, we need the starter operable. Eric is on a much needed vacation, so I had to see if I can put what I learned from him to use. I started by adding leads to the starter push button and then terminating these leads to a connector. So I soldiered on a pair of wires to the switch, added some heat shrink and labels, and then crimped on pins and assembled a connector. Incidentally, a spring clamp works well as a third hand. 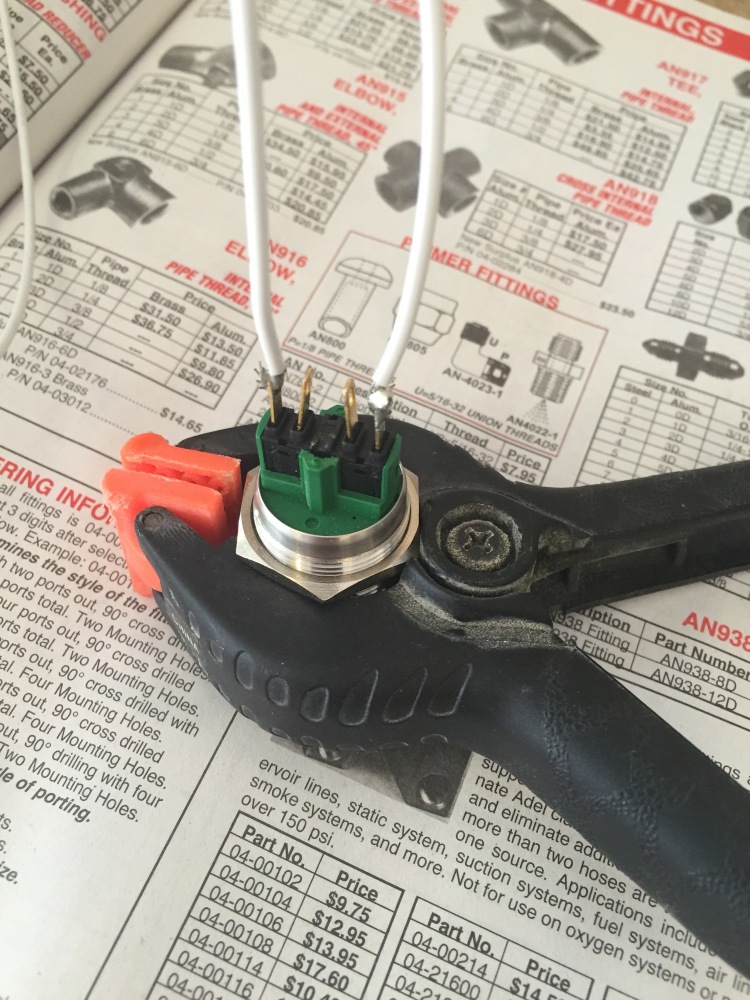 I didn’t take any pictures of the rest, but it was basically taking the starter lead from the VPX and terminating it in the mating connector to the starter switch, then running a wire from the other terminal back to the starter solenoid. I also needed to add a ground to the solenoid, which was a small jumper from the firewall ground bus to the base of the solenoid. Easy peasy.

We then had a starter push button. We don’t have the starter ring gear installed, so I did go ahead and try it. Low and behold, the starter motor spun! Good deal.

Greg and I then worked a little bit on the fuel vent system. There will be more on that tomorrow.

I also spent some time cleaning up some wiring and tying things off. Being sure to allow enough slack to prevent vibrational failure, but keeping things from chafing, or getting caught on things. In some places I used silicone fusion tape to further prevent any chafing.  There are plenty of more wires and hoses to secure, so there will be more photos to come.

Lastly, I swapped two wires on the rocker switches to make the labels correspond to their functions. Last time they were installed, the master and the alternator switches were reversed. All better now.

Tak about a good day in the Garaggio!

2 thoughts on “Air, spark, and starter ”