If you can’t read the title, don’t worry, we will make it simple. The weather is crap. It was only a matter of time before my good luck changed with the awesome late fall weather we have been having in Minneapolis. To be quite honest, I am ok with it. We have maintenance work to do. Its much better not flying on crappy weather days and being ready to fly when the weather is nice.

I got the new fuel injector line for the #4 cylinder today. So I used the old one as a template and bent the new one up. With some minor tweaking, the new one went in with minimal fuss. Everything is torqued down, and the fuel system is back to operational. All that remains is to do an engine run leak check and we can call the fuel system airworthy again.

To prevent similar damage in the future we restrained the bleed air line. I got example photos from the manufacturer of people using rocker cover screws to secure the rail, but Greg and I opted to use the induction tube bolts. They were actually better located in my opinion, and they don’t affect the rocker cover seal.

I fabricated some small aluminum links to tie the adel clamps to the induction bolts. For one of the locations I was actually able to use an unused aluminum bracket that came with the fuel injection installation kit. The bleed air rails and hose are now secured such that I am convinced that this failure cannot happen again. There is enough give to allow them to vibrate since each one is connected to two cylinders that vibrate independently of each other. Yet they are rigidly clamped enough that a failure will not allow them to chafe on anything. Done. But we will keep an eye on it. 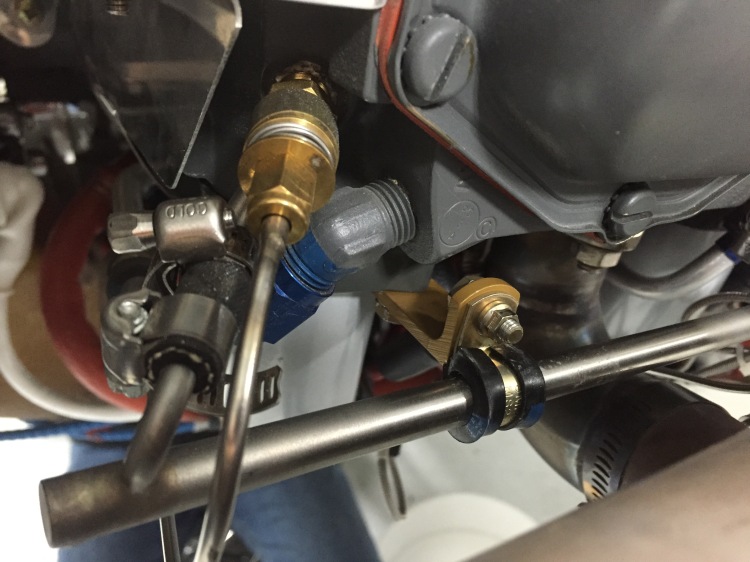 While I was working on that, Greg took care of a laundry list of maintenance items. We have had a small leak around the base of the dipstick tube. Turns out it was somewhat loose. So he tightened that. Also we had a small leak around the thermostatic bypass valve, so he torqued that down more.  We will see if that solves the leaks. If it does, our installation will be very dry.

Greg also pulled the fuel filter out of the fuel injection servo for an inspection. It was clean as could be. We didn’t get to the inline filter up near the valve, but we will before the next flight.

We also found an exhaust leak on the exhaust flange on the #2 cylinder. So we torqued all the of the exhaust nuts down again and cleaned up the evidence of the leak. That way we can see if it is still leaking. We will continue to keep an eye on that. While we were doing that we checked torque on the induction tube bolts as well.

It was time to check torque on the prop bolts. So we snipped off the safety wire on those and checked torque. The bolts did each take a small bit of turn (less than 1/8 of a turn) to get to the recommended torque. Then I realized I am out of .041 safety wire, so I need to get more.

Before Greg had to leave, we came up with a plan on how to fabricate a cooling air ramp to try to help direct more cooling air to cylinder #3 to lower the CHT. I think we have a good plan for a first try. It will be interesting to see what the effect is.

Lastly, I used my phone a friend for the week and called electronics tech support… ahem… I called Eric. He graciously agreed to walk me through troubleshooting the right fuel gauge which isn’t working. He explained how to check the probe to ensure there wan’t anything wrong or shorted with the probe.

The probe acts as a capacitor, so you have to “charge” it by shorting the two leads of the capacitor with the ohm meter. Then when you remove the short and measure the resistance across the probe, it should start with a relatively low resistance but the resistance will increase since the capacitor is being discharged. We were able to verify that the right probe (the side that won’t properly display fuel level) is acting like the left one (that is displaying fuel level properly). So we know that the probe is fine.

We then swapped the processor boxes and the problem followed the box that was on the right side. Additionally, with the processors swapped, the right tank indicated fuel quantity near what it should have been. It was well within the realm of a calibration error. So we are convinced that there is a problem with the one processor box. I will call the manufacturer tomorrow and hopefully send it in for repair or replacement.

Tons of maintenance and repair done today. Maybe crappy weather (once in a while) isn’t so bad.