Saturday was the main event for the MEFI. There must have been around 100 airplanes there and 1,000 people. There were all kinds of cool things there. Most of them rare. Elliot Seguin’s twin engine jet powered Quickie, the ARES, White Knight II, an airplane called the Shirocko, and tons of other stuff. 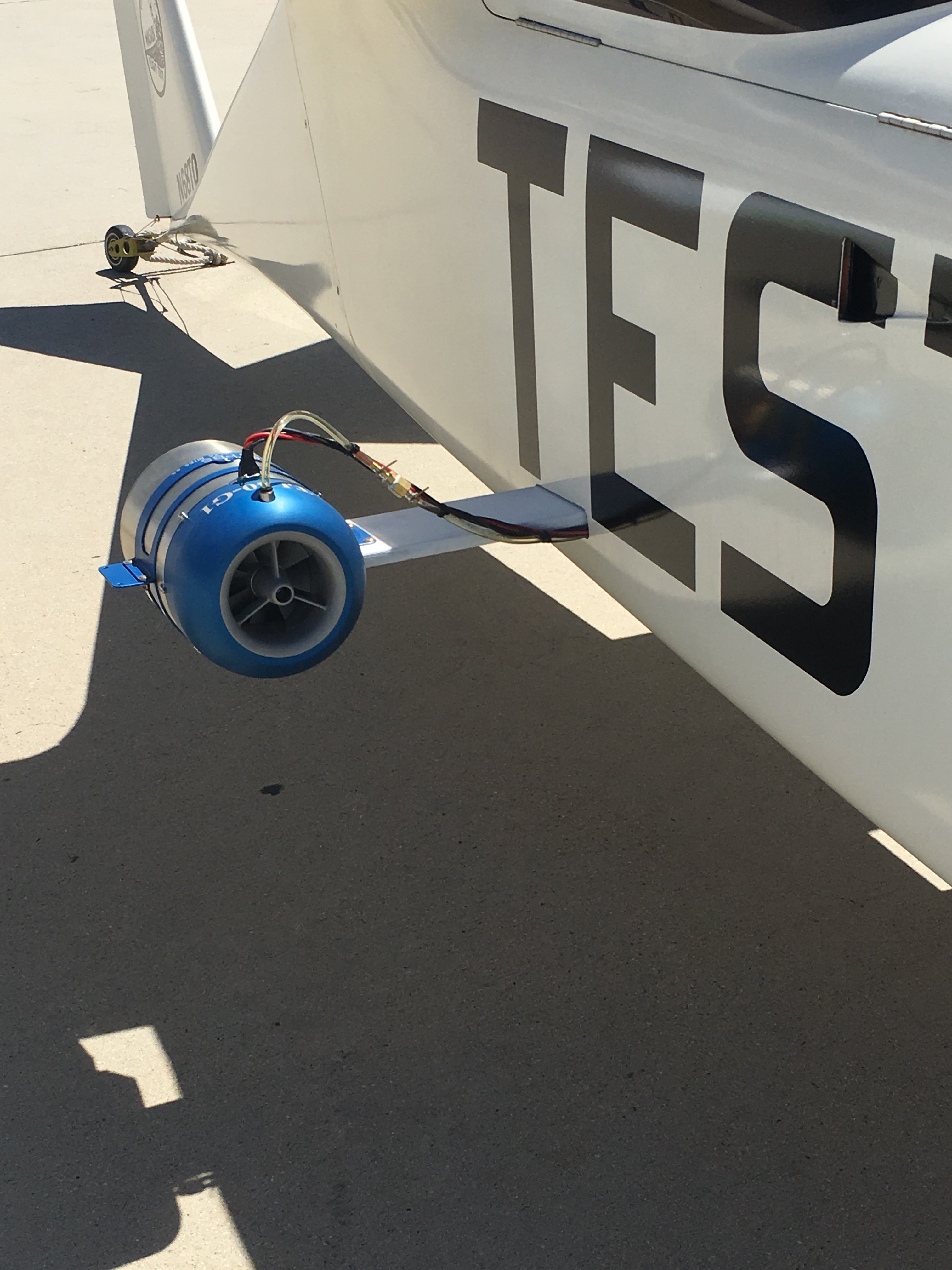 Unfortunately, I didn’t get a lot of time to go and peruse. I was standing by Betty most of the time answering questions about the mods on the airplane and the winglets. I met some very interesting people, and it was so humbling and flattering to have so many people interested in the airplane.

I was asked by Justin and Elliot to have the airplane judged. I wasn’t planning on it. In my eyes, Betty isn’t nearly done yet. I hadn’t even cleaned her since flying all the way from Phoenix. But I agreed to have her judged. 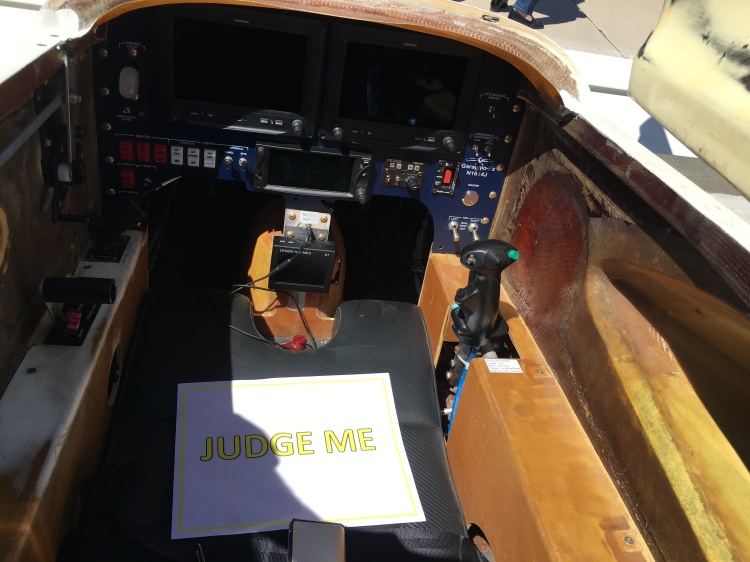 The judges were very impressive in their backgrounds. All of them were homebuilders, or engineers, or very experienced with experimental airplanes. I spent probably 45 minutes to an hour talking with them about Betty. We discussed all of the modifications I made, why I made them, the engineering behind them, and how they were carried out. None of the judges were concerned with why the interior wasn’t painted, or the fact that i didn’t have a $30K paint job on the outside. They were interested in the experimental part of the homebuilt airplane.

The judges kept notes and scores on three areas that follow the Scaled Composites methodology for projects: design, build, test. So as I was giving them the discussion on the airplane, I was sure to discuss things in those terms. There were five awards up for grabs. They were, Best Build, Best Test, Best Design, Experimenter of the Year, and Best Attempt. You can read more about those here. http://www.mojaveflyin.com/p/awards-description.html

While I was talking about my airplane with other folks, Dick Rutan pulled in and parked right next to Betty. Its not every day that your airplane gets to graze with Dick’s airplane. For those of you who don’t know, Dick is a very famous and accomplished pilot, most well know for flying the Voyager around the world un-refueld, non-stop over the course of 9 days. 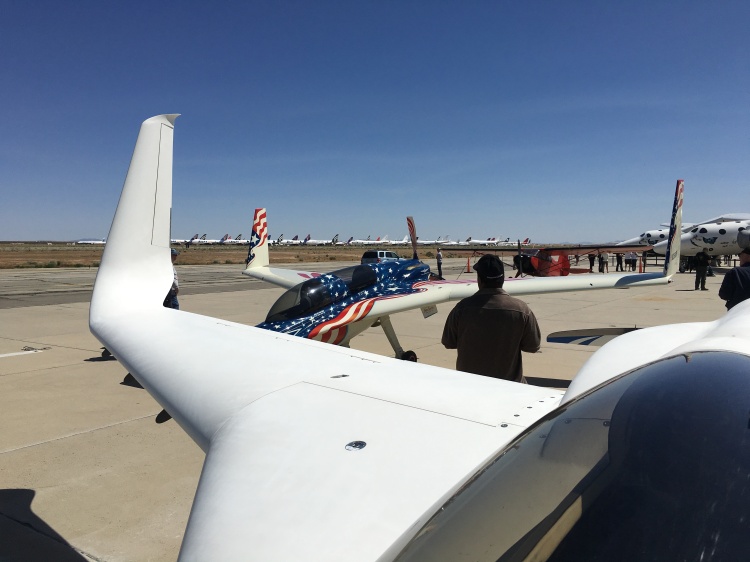 After I got done chatting with people, I did get a bit of time to look around. As the fly-in was drawing to a close and most people were heading out, Ben and I each offered two of the Van’s Aircraft employees EZ rides. Neither had ever been in a canard airplane. I kept teasing Rian Johnson that he was defecting to the enemy, and so I had to get a photo of him with his Van’s staff shirt in the airplane.

And of course, he has to sign the guest book.

The evenings schedule was a banquet and then the awards ceremony. The speaker at the banquet was James Brown, the world’s highest time F-117 Stealth Fighter pilot. He was a test pilot for Lockheed on both the 117 and the F22. It was a very interesting talk. One of the most interesting pieces of information he told us was that the F117 was so unstable that if the flight control computers “went stupid,” in his terms, the time to double amplitude divergent oscillation was .2 seconds. Completely unflyable without computers.

He also talked about the patent for the F117 and how it was originally filed as “the vehicle.” The reason for the facetted shape of the airplane was that they had a computer program that could predict the radar signature of the airplane. But due to limited computing power back in the day it was designed, they had to bound the computer simulations to smaller shapes. Hence the small facets that the computers could reasonably handle. Cool Stuff.

Here I am holding a piece of a F117 that was scrapped. Jim had time in the airplane this came from.

Then it was time for the main event. The awards ceremony. I am honored and humbled to say that Betty and I won an award. The award we won was for Best Build. The description for this award from the MEFI website is as follows: “Best Build: This award is for the best craftsmanship mod of the year, corresponding to the build quality (aesthetics, schedule, build difficulty) of the mod.”

Not only does the caliber of the judges but also the quality of folks that won the other awards makes it even more humbling for me. I was rubbing elbows on the awards stage with Kevin Eldridge. He won best design for the Lancair Evolution with the Lycoming IE2 installation. Kevin is an accomplished Reno racer and has been involved in many aviation business pursuits including the Nemisis NXT, Superior Engines, and ACE-Performance engines.

Then there was Andrew Findlay. He races the Stihl sponsored Lancair Legacy at Reno. He has done some amazing aerodynamic, turbocharging, and cooling projects on his airplane. He won Experimenter of the Year.

Rian Johnson won Best Test on behalf of Vans Aircraft for the RV14 test program. Rian and his team at Vans tested and developed the RV14 which is now available as a kit. If you get a chance, YouTube the RV14 and you can see some of the testing they put the airplane through including the drop tests to FAR part 23 standards for landing gear design.

An additional award this year, Best Attempt, was won by Tom Siegler for the project he is still working on but has not yet gotten flying. The award description says “for a achievement or project development that has not yet reached their goal, but is noteworthy nonetheless. He is restoring a very historic racer, the Cosmic Wind. He trucked the project to the MEFI so it could be on display in progress. That in and of itself is pretty awesome.

Taking the time to introduce you to the caliber and scope of the 2016 MEFI award winners makes me question my belonging on that stage. But I can certainly tell you one thing, I have a renewed energy to prove and/or earn that belonging. 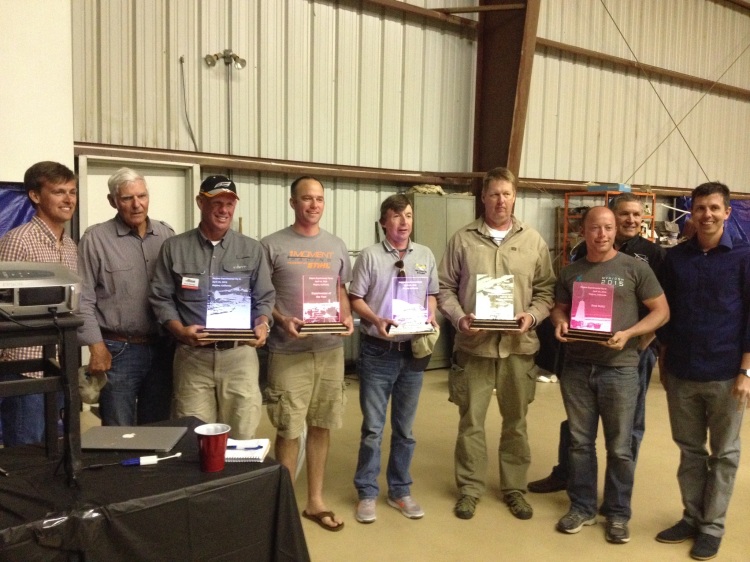 Some good coverage of the awards can be found on Kitplanes.

After the awards were handed out, we got the opportunity to chat with both James Brown and Dick Rutan. James talked about the F117 and F22 with us and Dick talked about my airplane and had questions for me. Then we got to talk about the Voyager flight. While I was talking with Dick, I found out that he took a photo of my winglets and texted them to Burt. How cool is that!