Wednesday I finished with work early, so I was able to start Betty’s trek back home to the twin cities of Minneapolis and St. Paul. The high level plan for the trip was to fly to Denver and spend the night with my buddy Lance. Then the next day make it all the way to South St. Paul airport.

Unfortunately, I was on call until 10:00 AM so an early start wasn’t going to happen. That was a pity because in Phoenix it starts to heat up, and in the mountains near Denver, the weather generally deteriorates in the afternoon. None the less, the weather was forecast to be good along my route and at my destination, so I launched. Knowing that weather will change I had many plans of where I could stop if need be. 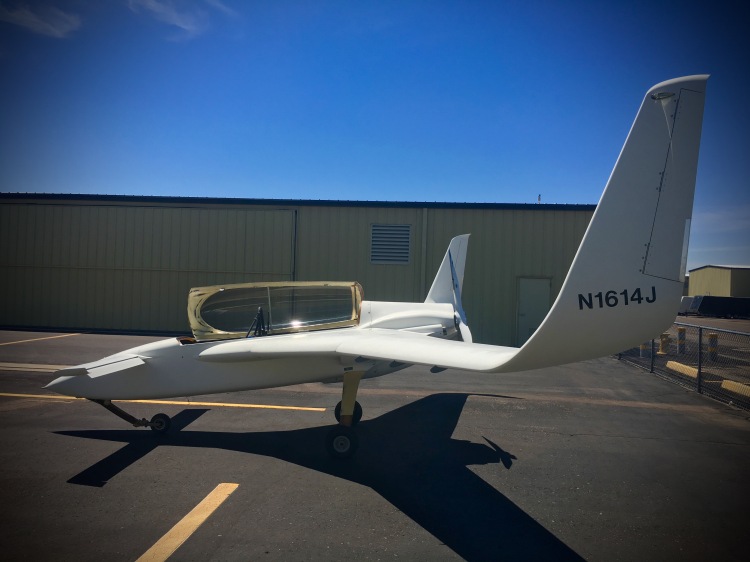 The route of flight was not going to be direct. There is some very high terrain along that route, airports become few and further between, and worse yet there is no place to make forced landings if you need to. So I planned my route to be from Phoenix to Albuquerque, NM where there is some lower terrain and a couple of mountain passes to fly though. Then from there to Las Vegas, NM and finally up the front range past Colorado Springs and into Denver Front Range Airport (KFTG).

Not far outside Phoenix is the Mogollon Rim and just past that near St. Johns there was a fire burning at the base of a mountain. No one had called it in yet, and the airplane just ahead of me along this route called it in to air traffic patrol so they could let the authorities know. 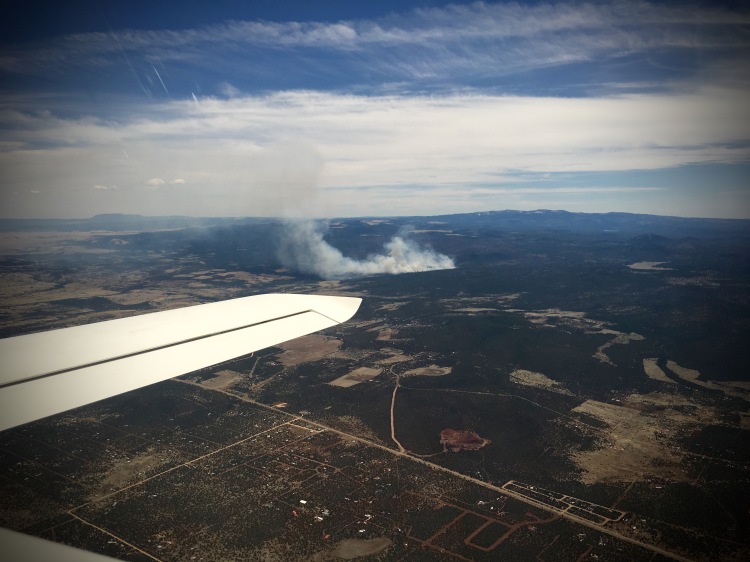 The flight was pretty nice up to this point but then it got a bit bumpy between here and Albuquerque. About 70 or so miles before ABQ, there was some interesting sights on the ground. A bunch of circular depressions in the ground that looked like they could be meteorite impact areas. They were pretty small, but cool to see from the air. 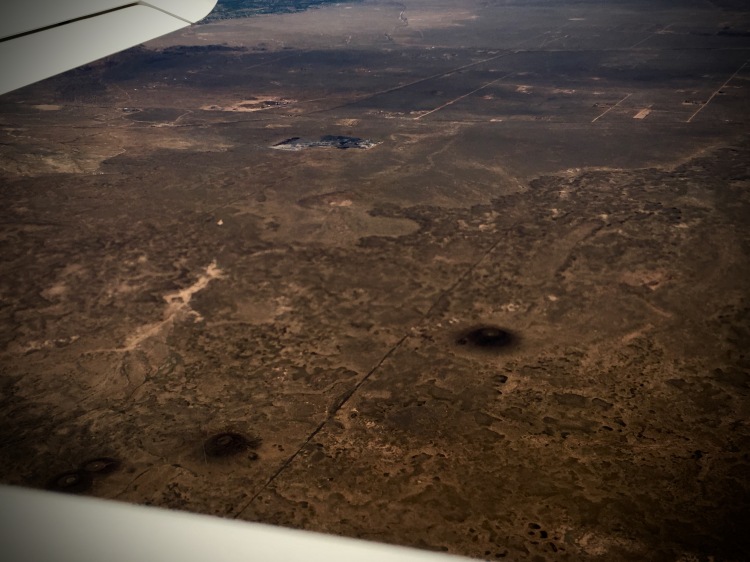 Flying through the mountain pass just south of ABQ proved uneventful. But gave me a view of the weather ahead. Of course, I do have onboard ADSB weather and had known that there was something brewing on the weather radar, but seeing it in person really lets you know what is going on. Sometimes the green returns on the ADSB are very high clouds that contain moisture that can be easily flown under. In my case, it was obvious this wasn’t the case and that there were localized areas of showers. However the gaps were wide enough to fly through safely, and I could see to the horizon through the gaps. 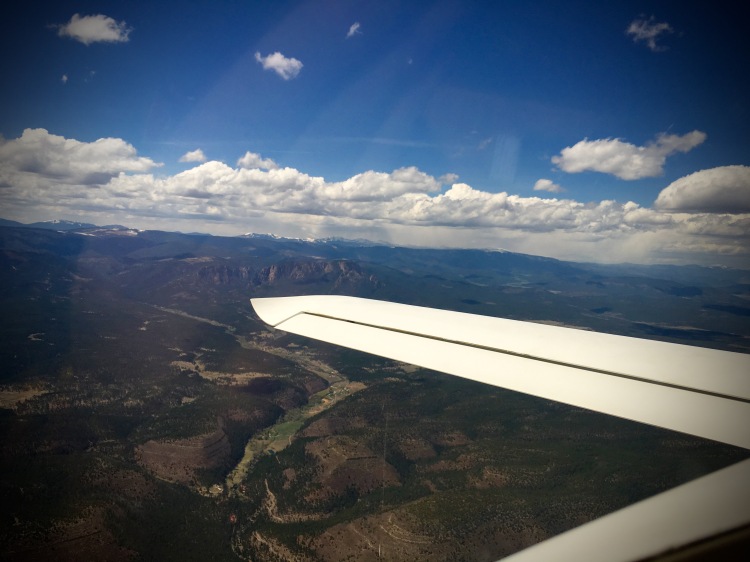 Unfortunately I got to a place where the gaps in the rain was closing and I could no longer see to the horizon in the distance. I was still VFR and the area behind me was clear so I could have done a 180 turn and gone back the way I came, so I started looking for a place to land to let the rain pass. Since airports are a bit sparse in this area too, I picked the very next one I came upon. Weather can change quickly, especially in this area, and I didn’t want to be in the position of passing up a good diversion airport and then not being able to get to the next airport. So I landed at Spanish Peaks, Colorado. It proved a nice little country airport, much like the place that I learned to fly. Though Spanish Peaks has fewer cracks in the runway than where I got my private pilots license.

It was a good thing I landed because as I was parking it started to rain a bit and visibility decreased, though still VFR. In my haste to get the airplane flying, I haven’t installed any weather/gap seals on any of the hatches or the canopy. I carry a roll of masking tape with me, and it proved useful to tape of the gaps to prevent the rain from getting on any of the electronics. 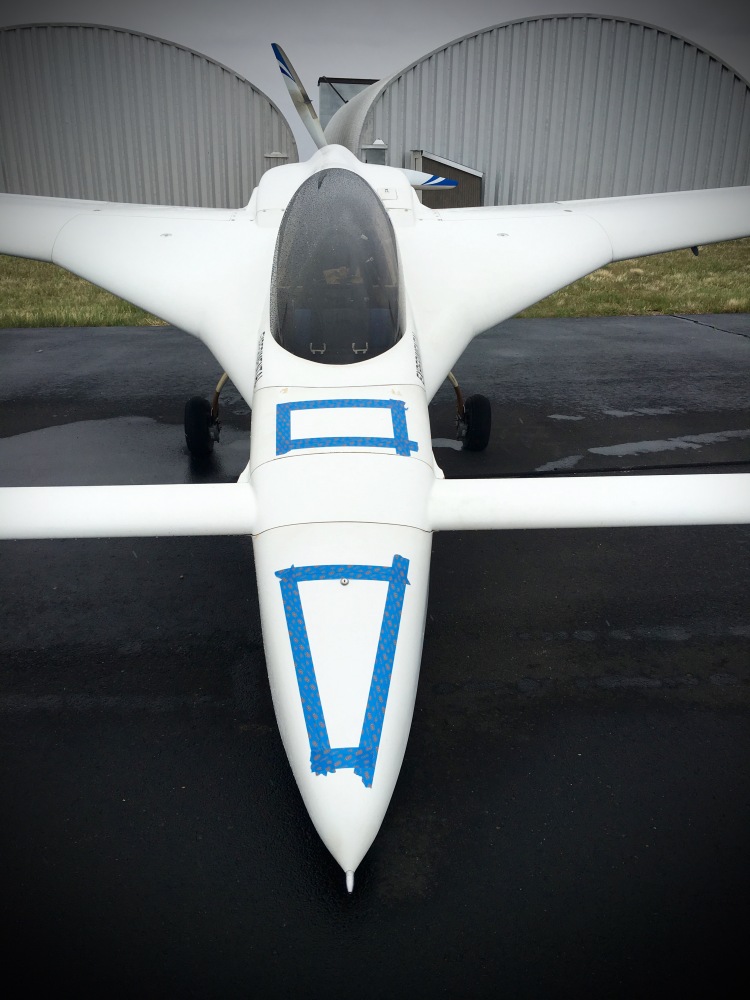 There was NOBODY at the airport. But I did find that they leave the building open during the days for transient pilots, their fridge was stocked with soda and water, and they had snacks for purchase. After a while the airport manager, Gary, stopped in to check on the airport. He was a welcome sight, and we got to talking. Turns out he is retired from Air Wisconsin Airlines, and we had plenty to chat about as the light rain came down. He gave me some local knowledge on the routing from there up to Denver and told some stories about flying in the area. He was one of those neat guys you get to meet when your plans don’t go, well according to plan, and you get the pleasure of diverting to somewhere you would otherwise have no earthly reason to visit.

Somewhere amidst his stories it cleared up and it looked like I had a weather window up to Denver. To be a good guest, I did buy a little bit of fuel. These small airports generally need the business, and their prices on fuel are usually lower than bigger cities. 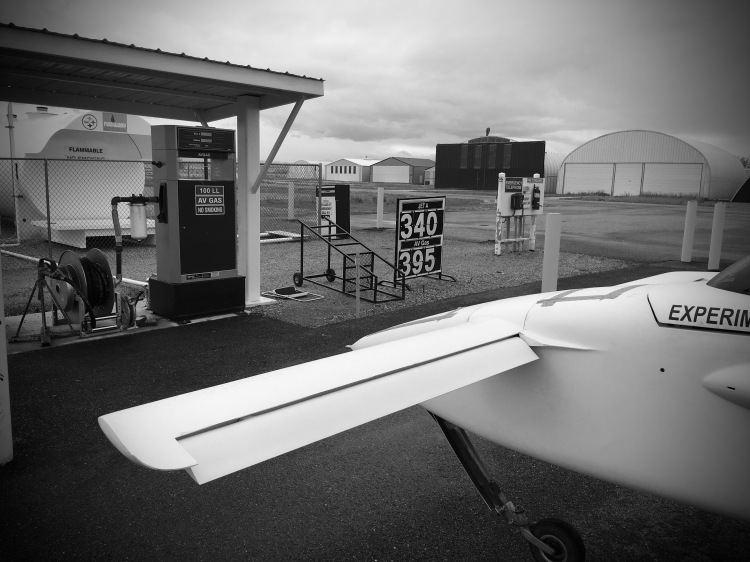 After takeoff, I set off towards Colorado Springs. As I was nearing, there was a strong storm building just east of the Springs. It treated me to the first of many rainbows for the flight. 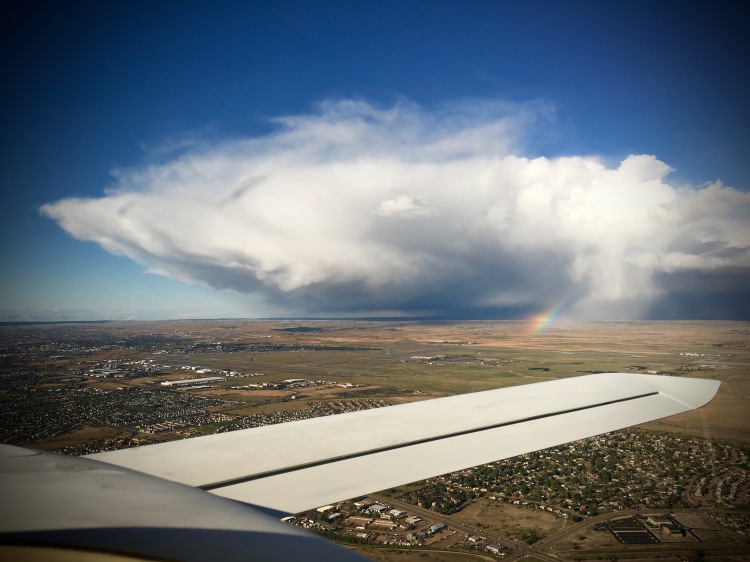 But to the west, it was pretty nice. 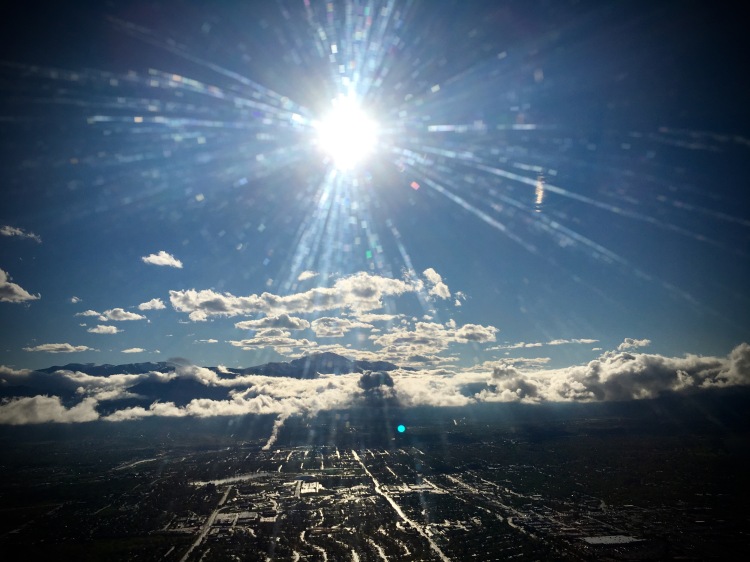 Colorado Springs Approach alerted me that many airplanes were diverting from Denver to other places, and asked my intentions. I commented that the weather changed quickly from what I saw on the radar 15 minutes ago before takeoff. Approach called up to Denver for me, and ATC said that they thought I would be able to make it in to Front Range Airport. So I pressed on. The storms were widely scattered and there was always an out, even if I didn’t end up at my intended destination.

It turned out that there was a small but intense cell of a storm in between me and Front Range. But the airport was still in the clear, just windy. So I deviated east around the storm and came into the airport from the north east. Initially they were using 26, but the winds were 190 at 12 gusting to 20. I gave it a try, knowing that unless I arrived at a lull in the wind the crosswind would exceed what I could handle with the airplane. It turned out that 26 wouldn’t work. I went around and asked for 17, and had an uneventful landing. I did get treated to a nice double rainbow from the offending storm just south, and now south east of the airport. By the time I could take a photo it was a single rainbow, but pretty none the less. 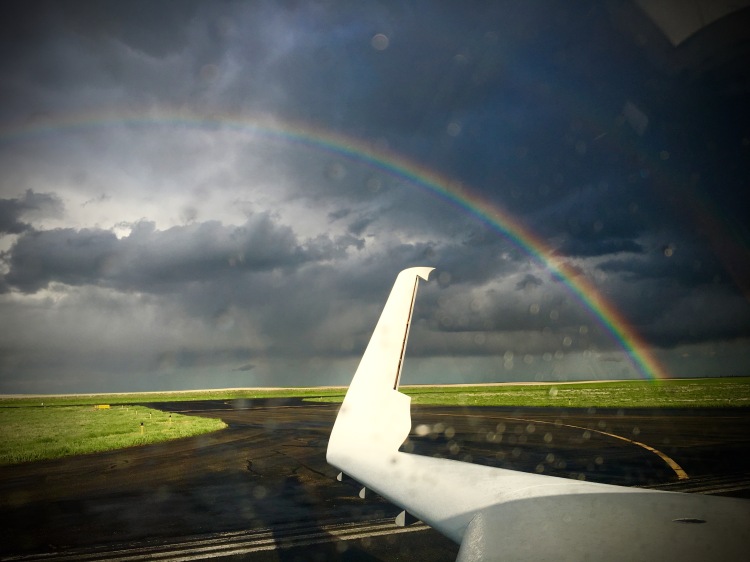 Made it to Denver after a little under 4 hours of total flying time. My buddy Lance was there to meet me. It was time for a nice time in Denver catching up with Lance and getting some food and local brews. 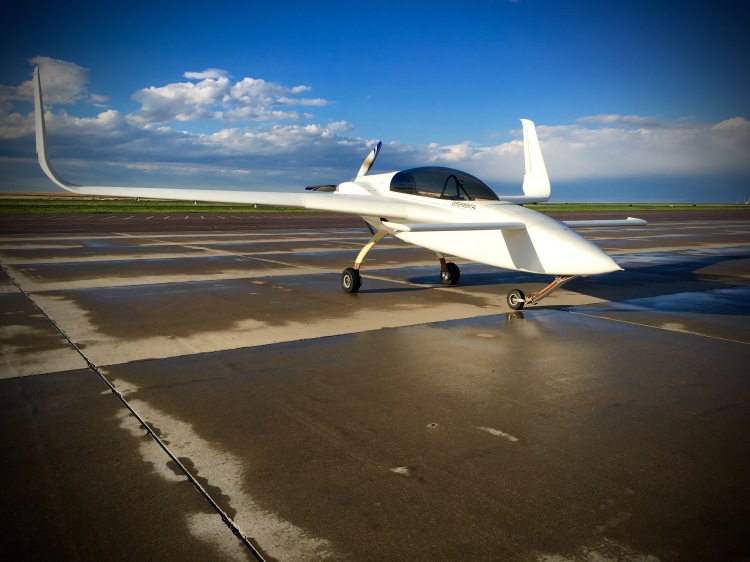 Lance and I had a very nice time. I would have liked to stay longer and hang out, or see some of my other Denver friends, but other obligations dictated that I had to head for home the next day, Thursday. But not without getting Lance a ride in Betty first. It was his first ride in an experimental. 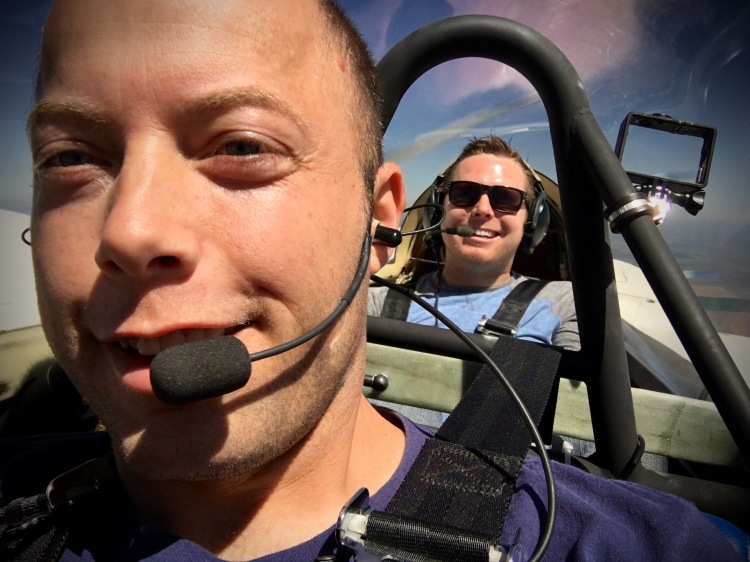 I think he liked it. He flies the Boeing 737 for work, and made the comment, “See, even Boeing pilots can fly a side stick!” 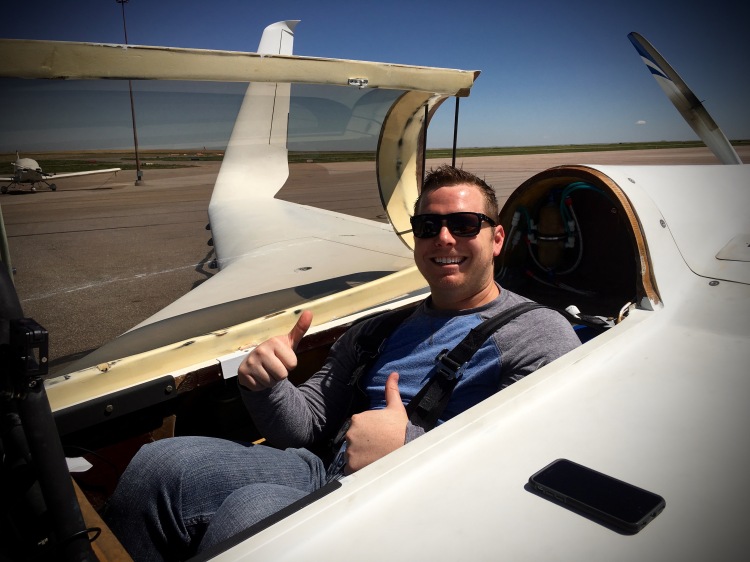 Then it was time to head off for home. I had done some flight planning the night before and decided to take the scenic route. I have always wanted to see Mt. Rushmore, but never have. My flight planning told me that it would only add 30 minutes and about 90 miles to my flight home, so I decided to go check it out. Until next time, Denver. 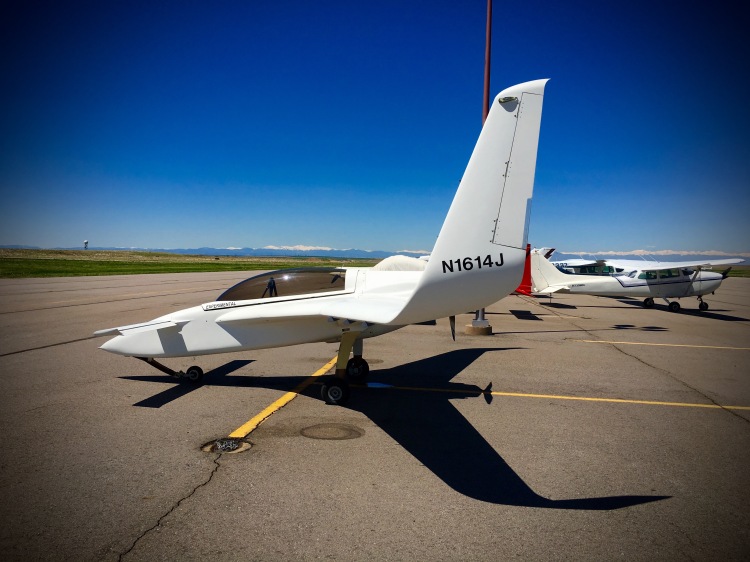 So out of Denver, it was basically straight north to just south west of Rapid City, SD. As you go up that way, you head over some plains areas and eventually it gets hillier and you arrive at the Black Hills. This is some of the interesting terrain as you get closer to Rapid City. 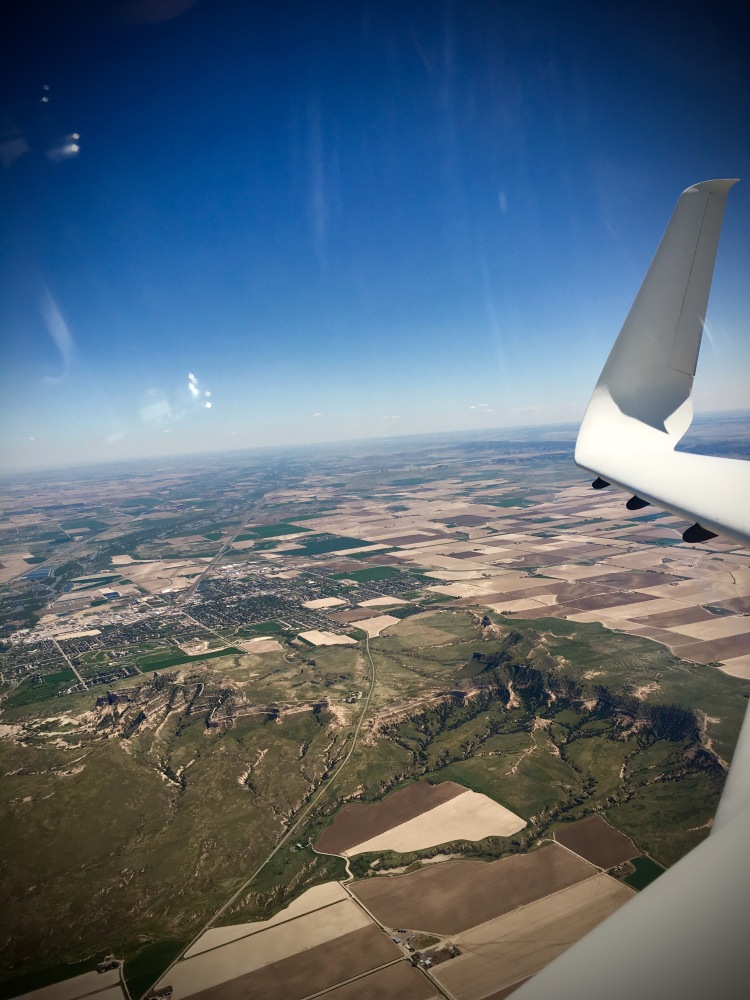 Nearing Mt. Rushmore, Ellsworth Approach advised me that the airspace limitations on “the Monument” was a minimum altitude of 7,700 feet and 1/2 mile from the monument. Between those limitations and the gusty winds and turbulence, I didn’t get really good photos of Mt. Rushmore. However, it was really cool to see in person. The photos don’t do it justice. If you are flying anywhere near here, it is certainly worth doing the tour. In this photo, you can just barely make out the monument, just above the visitors center and parking lot. 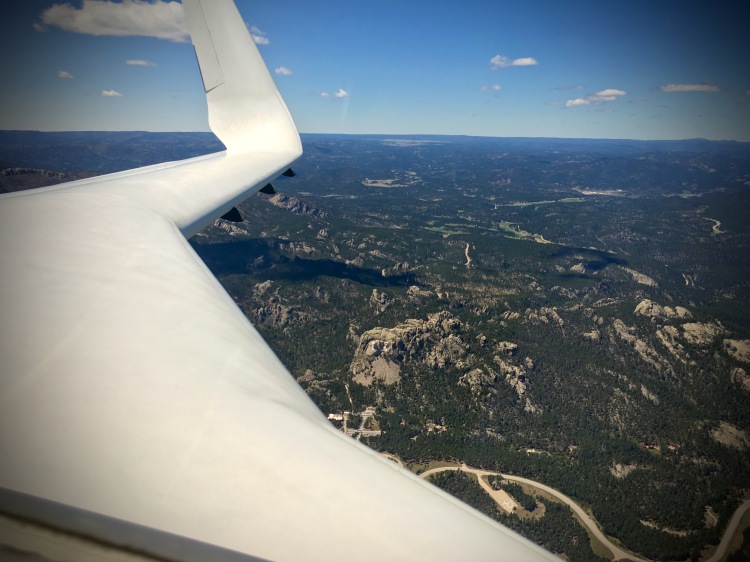 Here it is zoomed in. Sorry for the quality. iPhone photo from a distance. 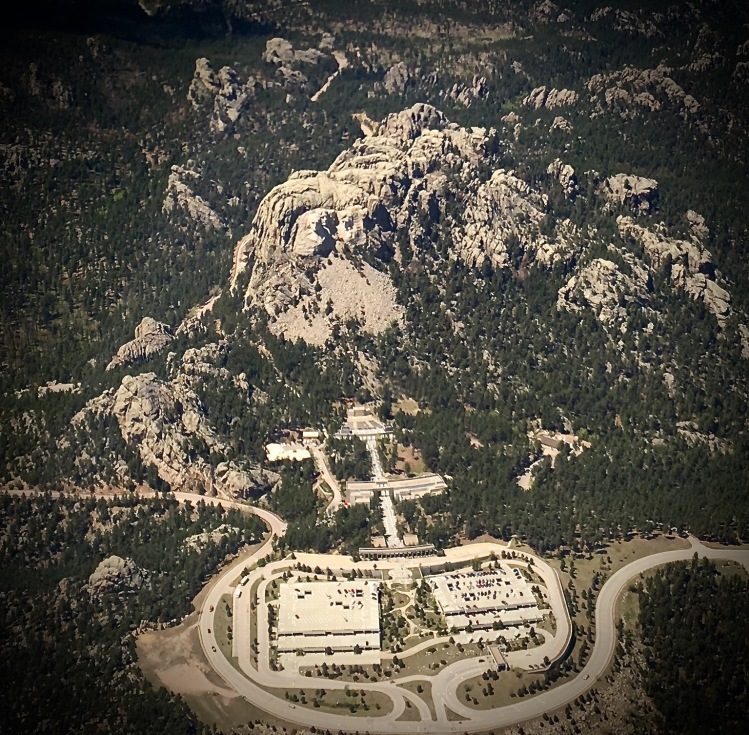 From there it was nearly straight east to home. I got some pretty good tailwinds along the way. I was able to make it without stopping. 4:20 minutes of flight time, and Betty is home. Thanks for another fantastic, safe adventure Betty. Kevin and Greg were there to greet us. Kevin even got a video of my approach.

Betty safe and sound back in the hangar. 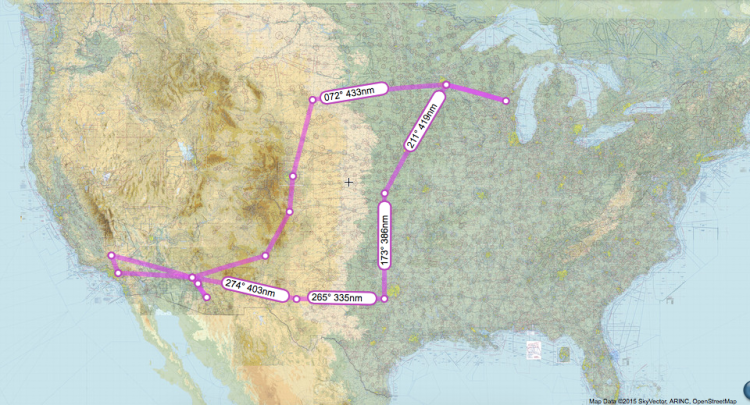