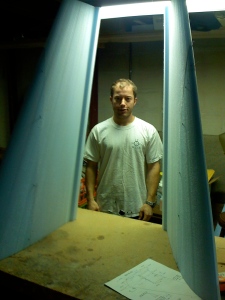 The winglets start like any other airfoil surface in the Long EZ build. You start by hot-wiring a foam core into the planform of the winglet, attach templates to the root and tip, and hot-wire your airfoil shape. Typically these cores are made from multiple blocks of foam. You can see these blocks temporarily attached with nails. A tip is shaped out of urethane foam, and fit to the winglet core. The core pieces and tip are then microed together to form a single core. These details are shown in the photo gallery for this section. MAKE SURE TO MAKE A LEFT AND A RIGHT WINGLET. THEY ARE MIRRORS OF EACH OTHER.

Once the core is set, com antennas are added before glassing. Since radio waves can see through a fiberglass airplane, we can place the antenna underneath the skin for a drag free antenna. The antenna is classified as a vertically polarized, quarter wave length dipole antenna.

This antenna is nothing more than two pieces of copper foil tape cut to the specified length, adhered to the foam core. Then the legs of the antenna is soldered to RG-50 coax, one leg to the shield of the wire, and the other to the center conductor. The wire is passed through a conduit in the winglet to the root of the winglet.

With the core as a single piece and the com antenna installed, it is time to prep for glassing. The trailing edge is prepared with a piece of peel ply. This is in preparation for the layup on the other side and creates an area that is ready for a ‘glass to glass’ bond to give strength to the trailing edge. We used nothing more than simple office type staples to hold the peel ply to the trailing edge of the core. Make sure to get the peel ply flat so you don’t end up with wrinkles in the skin.

The winglet is laid up with crossing plies of UNI and one ply BID in the area where it will attach to the wing. This attachment area is then covered with peel ply to prepare for the secondary bonding operation when mounting the winglets.

Once cured, the trailing edge is trimmed flush with the foam core. The winglet is turned over. The ‘fishtail’ shape on the inboard side is then rough cut off with a hack saw blade, then sanded into contour with the rest of the winglet. This strange shape only serves to give extra strength to the foam core until the inboard skin is cured.

You now have a winglet core that is sanded to final contour, and a 3/4 inch trailing edge of bare glass for a stronger glass to glass bond. The outboard skin can then be laid up, similar to the inboard.

This is where we took a break for a while on the winglets. Once you mount the winglets to the wings they take up considerably more space and are more difficult to store. It turned out to be a good thing that we stopped here since the project was moved after this point.

It was finally time to get back to winglets and get them mounted to the wings. The winglet mounting starts with locating and jigging the winglets into the proper location. This was done by roughly setting the winglet into location. I clamped a board to the winglet and used a ladder to hold the other end of the board. During this installation I decided to deviate from the plans.

I had seen an E-Racer and a Cozy Mark IV that had some blended winglets with really cool ramp appeal. The prospect of building blended winglets at that point seemed way beyond my ability, so I didn’t want to try to do the blended winglets. (Yea, funny I know.) But I did want winglets that looked cool and were different than everyone else. So I decided to cant the winglets outboard instead of the plans inboard cant.

With that decided I fine tuned the location of the winglets using the plans method. Basically you measure from the aileron corner to the leading and trailing edges of the winglet root. The proper dimensions are in the plans. These two dimensions I used. Then to get the outboard cant, I used a different measurement from the aileron corner to the trailing edge tip of the winglet. I do not recall at what angle I canted the winglet, or the measurement. The most important part was to make sure that both left and right winglet were the same.

The first layup is done from the inside of the inboard winglet skin to the inside of the top skin of the wing. To do this, you first make access to these areas by cutting out a wedge of foam and sanding the inside of the skins for a structural bond. Then you make up foam wedges to replace the foam that was removed. These foam wedges also hold the glass layup firmly in place against the respective skins for cure. Any voids in this area are filled with flox.

The next structural layup done is basically an end rib for both the wing and winglet. Flox corners are created along the bottom skin of the wing and the outboard skin of the winglet. To do this you simply remove a similar, but smaller wedge of foam and sand the inside of the skin again to prep for a structural layup. These troughs are then filled with flox during the layup. The layup is done across the wing and winglet cross section, making a 90 degree turn.

Next you have to add a block of foam between these two ‘ribs.’ It is a block of urethane foam that is bonded in place, and then carved to make a straight line between the bottom skin of the wing and the outboard skin of the winglet. Instead of carving a block of foam to fit this area, I used pour foam, then carved it. There are something like 9 plies of UNI and 2 BID that make up this layup. This is structural layup number 3.