On this page I will be attempting to highlight major steps in the process and when they happened to give you an idea of what the airplanes current status is and how long it took me to make ‘major visual progress.’

Project Acquired and moved into my rental place in Milwaukee. We only had a single car garage there. It was unfinished and shared with the other unit tenant. It was a terrible place to work, but it was a place to get started.

More about the project as it was acquired.

First task working on the Ez. Marty had me start into the project by building the landing brake. The very first thing I had to do was cut a large 17×17 hole in the bottom of the fuselage. Thats not intimidating for getting your feet wet with your new airplane project! 🙂 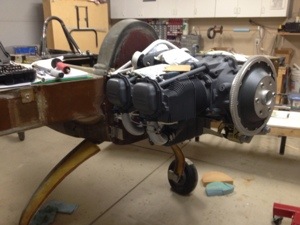 Today was a big day for the project. The engine was mounted to the fuselage for the first time. Additionally the ignitions and 90 degree oil filter adapter was installed. As normal with this project, it wasn’t without difficulties, I had to cut a tube out of the mount in order to get the engine mounted. Details can be found here.