Today started with Jon and I cleaning up around the edges of yesterdays layup. We knife trimmed and sanded the elevator root fairings as well as all of the sharp edges of any plies of fiberglass inside and out.

While we were doing this we noticed that we had a few air bubbles larger than were acceptable. Since the epoxy was still chemically active, we drilled two small holes in each of the air bubbles. In one end, we put a syringe filled with epoxy. The other hole allowed the trapped air to escape as we filled it with epoxy. Problem solved.

Then we put the canard on the airplane to check fits before proceeding. It was a good thing we did because there was some major interference. The canard would not go into its proper position. In fact, it was over 1/8″ out of position. This was evident because the canard mounting lift tabs are supposed to be flush against the F22 bulkhead, and they were not even close.

When we explored more, we saw that the F28 bulkhead (the one that we just put in yesterday) was not flat. This stands to reason. The bulkhead was laid up in place, and not on a flat table, like you normally would! I should have known that we needed to take extra efforts to make sure that a 1/4″ piece of foam stayed straight when held vertically. It is not detrimental to the integrity of the bulkhead, but did prevent the canard from reaching its proper position.

So we were left with a choice in how to fix it. We decided that since the F28 bulkhead is structural, and more work to change, that we would change the canard cover. The canard cover is a cosmetic/aerodynamic shape but has real low stresses. So basically we cut out the back end of the canard cover and dished it out to allow the canard to fit back into its original location. As a side note, once we got enough clearance to get the canard back to its original location we remeasured the incidence and sweep of the canard. The incidence was  within .2 degrees and the sweep was within 1/16″ over a length of 128″. I’ll take it. 🙂

Jon then prepped the canard cover rear bulkhead for a layup and completed that layup. It was 2 plies bid with flox corners as per the original plans. Hopefully after cure, it will still fit.

Greg was also here today. A lot of what he did was consult with us on the canard fit issue. Jon and I got sufficiently frustrated with that, it was good Greg was able to bring us back to thinking straight. Greg also worked a lot on prep sanding the fuselage for eventual micro filling as well as sanding the canopy hinge fairing areas.

Lastly, I was able to put the end rib on the elevator root fairings. It was a basic 2 ply bid layup with flox corners.

Tomorrow we will be checking fit on the canard again, if you see a mushroom cloud over the Twin Cities, you will know it didn’t fit. If it does, I hopefully will be finishing the canard saddle/cut out layups and canopy hinge fairings. Those are the only two things holding us up from filling the fuselage. 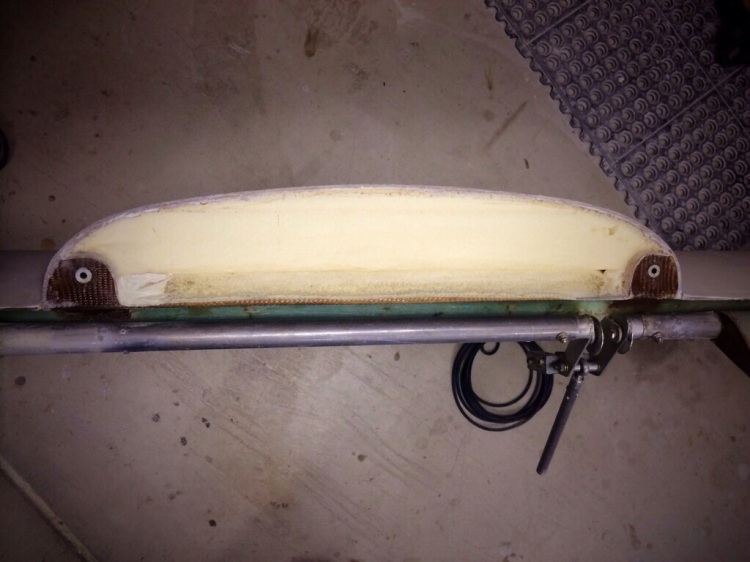 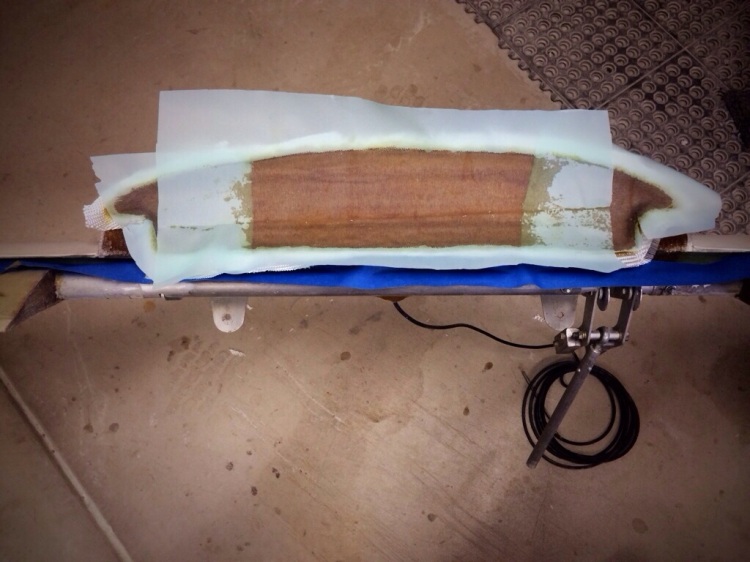