Garaggio time has been somewhat limited lately. It is less than one week until the application deadline and just over three weeks until the AirVenture Cup, so distractions abound. And that ugly four letter word… work… keeps getting in the way too. But, today I actually got nearly a full day in the workshop.

Oh and I would be remiss to forget that The Garaggio had a visitor last week. Rick Hall, a Cozy builder from Longmont, CO, was in town and came to take a tour of the workshop. We had a good time meeting and talking canard. I enjoyed his visit and hope to go visit his project sometime soon.

Today Greg was here for the majority of the day. We working on our third attempt at baffles. We first bent the aft baffle piece to add a horizontal flange for the rest of the baffle pieces to mount to. The aft cylinder head baffles have to be redone to accommodate the new aft baffle location, so we used the existing ones as templates and cut new pieces.

Then it was cut and fit around the exhaust pipes and intersecting baffles to get them to fit nicely together. Luckily, I still had a template from the last round of baffles that isn’t exactly right, but would give us a starting point for the shape of the bottom perimeter of the aft baffle. Since we changed baffle locations, the aft baffle had to be bigger, but it gave us a shape that we could enlarge by 3/4″ to use as a starting point.

From there it was an exercise in cut and fit. We would install the cowl, mark the interference, remove the cowl, trim, repeat. It took a lot of time sneaking up on the shape, but we finally got it to where bot the top and bottom cowl will fit. The gap is still way too small to allow for engine vibration. I don’t want to trim to final gap until everything is secured and we know nothing is going to move opening up gaps to any larger than they have to be. 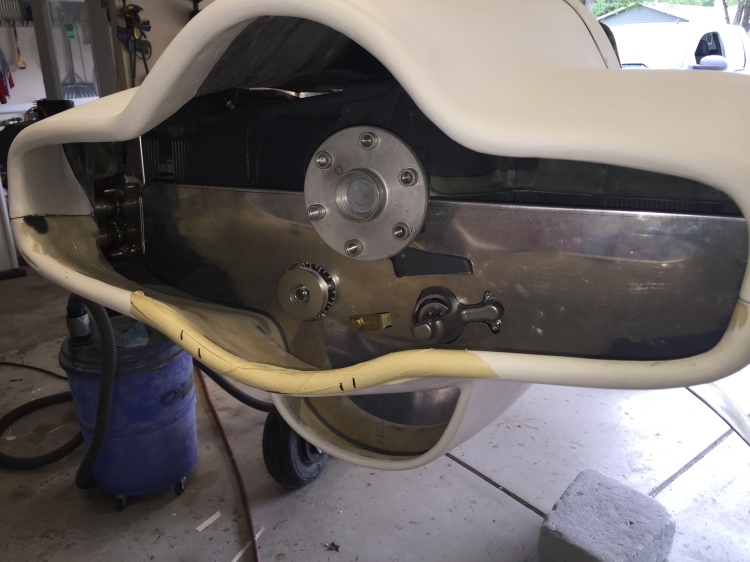 Next steps on the baffle will be a little more trimming and then working on securing these pieces together. Hopefully I will have time this week yet to do some of that.

Later in the evening, Eric was here. We have been having an issue with our house AC and since Eric is an electrical genius, he looked at the electrical side of it for me. Our troubleshooting was inconclusive. We will have to wait for the technician to look into it deeper.  When we finally got to the workshop, he got some BNC connectors installed on the antenna wires. We were able to hook up Com 2 and receive the AWOS form Flemming. Kinda fun receiving and listening to something on the radio. There is a humming on the intercom coming from something. We didn’t have time to troubleshoot as it was getting late, but I am sure we will figure it out.